See a pattern? A western pattern maybe? *okie acts like she takes off a cowboy hat and twirls it in the air and hollers* YEE HAW!!! Okay, it might surprise some of ya'll but guess what. I use to wear cowboy boots! Yep that's right...okie had cowboy boots. I mean did ya really expect me to wear loafers when it was time to go out and feed and work the cows? I even had a horse when I was a teenager, CrackerJack was her name. She was a half Paint and half Quarter Horse. I bought her myself and had to take care of her. She was a crazy horse and even threw my brother one time and he broke his arm. CrackerJack didn't care much for folks riding her. I could ride her okay but that was because we had an understanding, as long as she didn't throw me, knock me off under the trees or take me in the pond then she could eat! She really was a beautiful horse even though she was as crazy as a bedbug.

Oh but back to the card. I found some really cool paper that looks and has a leathery feel at my bargain store here in town when they got that shipment of scrapbook supplies in. I just knew I had to make some boot cards with it. 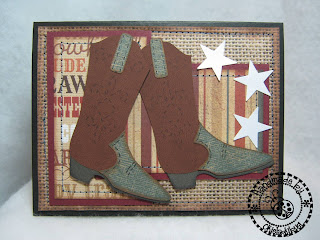 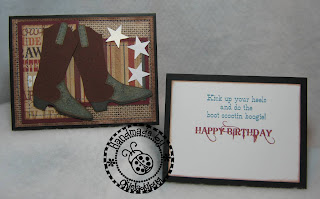 This card did take more time to put together than I thought but it was all the doodlin and sewing that took up the time. I think both really made the card look nice and polished. I came up with the inside sentiment on my own *okie is still so impressed on how clever she can be at times*. 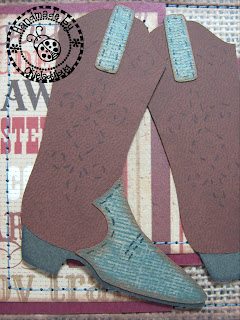 I took a close up of the boots because I wanted you to see the detail of the "leather" paper and the boots. I sanded the coredinations before I cut the strap and the toe of the boot and I think it came out lookin a little like denim. Doing the stitching of the lines of the boots took a bit because it was hard to see the little cuts, next time I might just use a gel pen instead...it would go a lot faster! I cut the boot base twice so I could have the heel a different color than the boot. On the leather layer I just cut off the bottom for the heel and sole. It really made a difference on how well the boot looked.