I was headed out of town on Friday when  I got a text from my friend Wendi, aka firewife, telling me that Walls *okie so loves her local bargain store* had a bunch of scrapbook stuff for 40% off. Now I go to Wall's frequently and I haven't seen this stuff so it must have come in very recently! Anyway I turned around and went to Wall's to check it out.

Once there I found Wendi and she was showing me all the cool stuff they had. There is no way I could even begin to tell you what all I bought so I did take some pictures! 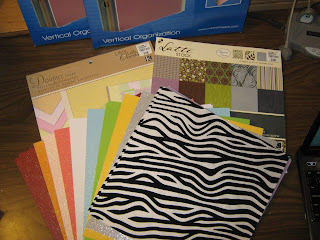 I have looked at the DCWV Latte stack for quite sometime now and when I saw it sitting on the shelf and the price was under $8 I went ahead and grabbed it! The K & Co stack was under $7, I believe anyway. I did get two of the larger Cropper Hopper paper storage folders. The solid color paper is actually glitter paper. I paid 60 cents a sheet for all the loose paper since it was specialty. They had a lot of Disney but it would have been $1.20 a sheet and I thought that was just too much! 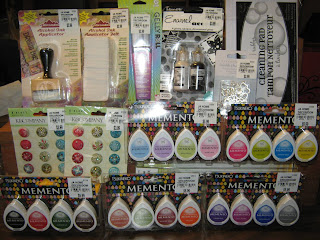 Here you see the Tim Holtz alcohol ink applicator and refills. I also got some Gelly Roll white gel pens, some Enamel Accents, a stamp cleaning pad and some heart charms. I found some K & Co buttons and since I have quite a few stacks I figured I would have something to match them for some of my layouts. One thing I was excited about were the little Memento Dew Drop ink pads. I thought these would be great to take to to Stamp Club or crops instead of carrying my larger ink pads. I wasn't sure what the regular retail price was on these but I figured $3.60 a pack was a pretty good deal since it made the pads less than a buck each. 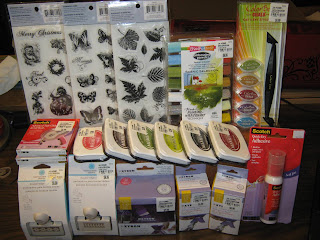 When I first saw the stamp sets with the leaves and the butterflies I grabbed some for my friend Linda, aka LGuild, thinking I would just give them to her..well when I saw the large Memento ink pads I knew I had to call her! I did end up spending almost $85 on the things Linda wanted *okie is so glad she had gotten paid that day so she could cover the shopping excursion*. I really liked the embossing powder set because it had a variety of colors.

Over all I think I got some really good bargains!