From blogging that is!

I didn't get anything posted on Sunday or Monday, shame shame on okie! *okie smacks the back of her right hand with her left hand*. Actually I have cards that I could post but right now I am a bit tired *okie wonders if she should tell her readers it is actually Monday night when she is writing this* and I don't feel like going in and editing pictures and such. I have been having some headaches the last few days as well, think it is the dang arthritis in my neck getting at me.

I have gotten a few more .cut files uploaded, check the layout and altered item tabs. It really is going to take longer than I thought to get all the files uploaded. I was going to load some more layout ones but I think the files are on another computer and I will have to see if that one will even fire up. Thank you to all those who have left great comments and understand this is quite an undertaking! I guess I should have done it this way long ago but I don't even think the options were offered for different pages when I first started my blog. 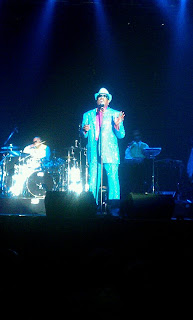 I went a concert on Saturday night...Charlie Wilson, ya know "my name is Charlie, last name Wilson". He is DDAAAMMMM SEXY!! I danced and sang through most of the concert. I even had a man buy me a drink! WOOT WOOT! Shoot maybe I can even get my groove back when I hit Jamaica on the cruise!

My friend Chelle called me earlier in the week asking if I wanted to go to the concert with her since she had an extra ticket. We had a blast and it was the first time Chelle and I went out and did anything in quite a long time! We were on the fifth row from the stage in the center! AWESOOMMEEE! I think Chelle was even surprised at how much I danced during the concert. My daughter was totally jealous as she loves Charlie *okie just wonders who wouldn't love Charlie*.

I was able to get some layout kits ready to take on the cruise. I am doing kits for my friend Karen and I to work on during the nightly crops. Since I have all the supplies I told her I would just do a layout kit for her when I did one for me. I am leaving some picture areas blank so she can fill in with what pictures she might like, but most of them I had double printed and including the pictures in the kit. I find it hard to scrapbook for someone else but with Karen I am not as pressured because I know she doesn't give a chit what it looks like, she is just darn happy to have it done for her! LOL

I will try to get some projects loaded to post this week. Maybe I will feel better this evening and be able to get some done.
Posted by okieladybug or okie_ladybug