I was on the phone with my friend Linda, aka LGuild, the other night and she got to talking about the card on the front of of this month's Cards magazine and how simple it would be to make. Well she and I both decided to try it out! It was very simple to make and was fast too!

I knew I had some wide ribbon that I could use for this, 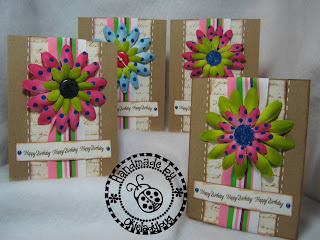 but the problem was trying to find ribbon and flowers that matched. I didn't have enough of the exact same flowers to complete 4 cards but I still think the ones I used worked out nicely.

The patterned paper is K & Company and is cut at about 3.5 inches I think. The ribbon is 1.5" wide grosgrain, and are tied to scrunch it underneath the flower. I didn't wrap the ribbon around the whole card, instead I tucked it under the patterned paper *okie thinks she might be just too darn cheap sometimes*.

The flowers are Petaloo's. I used a white Signo gel pen for the faux stitching *that reminds okie that she needs to order a box of pens since she and Linda, aka Lguild, are both running low on the pens*. The sentiment is computer generated on Microsoft Word. I cut the sentiment strip at 3.75" x .75" and then added a two Queen and Company pearls to give the illusion that is what is holding the sentiment on there.

Here you can see a little more close up of the cards. On these two I 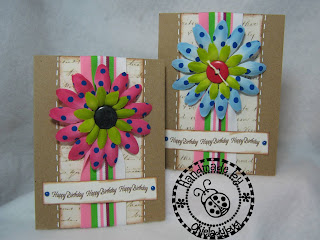 used buttons for the flower centers. One was a hole button and I tied twine in the center. The other was a post button and I broke the post off with a pair of pliers so it wouldn't stand up and would adhere a little better. I use this method quite a bit because there are some great post buttons but the posts get in the way. I just used Glue Dots to adhere the buttons to the centers.

These cards went together really quick once I found what supplies I wanted to use. I could have cut flowers using the Cricut but since I had these I thought they would look nice.

Oh and I would just like to mention that when Linda, aka LGuild, came to my house she took some of my wide ribbon! SHE IS A THIEF!! *okie puts on a helmet because she knows Linda, aka LGuild is gonna bonk her on the head for that one* Okay okay I will tell the truth. Actually I told her to go through my ribbon box and take what she wanted and just to send back what she didn't use. She didn't want to take it but she did pick some out. I can't wait to see what she makes with it!

GUESS WHAT! LINDA, AKA LGUILD, HAS A BLOG NOW!! She started her own blog so she can post what she makes. Go check her out at Nothin' Fancy! She has her Ribbon Flower cards.
Posted by okieladybug or okie_ladybug