I think this card was cuter in my head than it turned out on paper. But since it is cut and put together it will just have to do. Besides who cares since it will go in my card box never to be seen again! This is also from Celebrate with Flourish.

I really can't remember what the background mat paper is 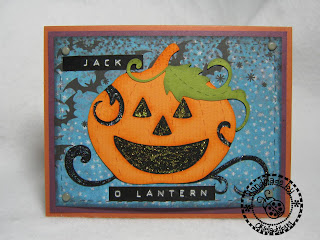 and I think I got it probably over 2 years ago. I thought it would look good because of the bats but I think I needed to cut the Jack O' Lantern smaller...but too late now!

Yep you see Stickles! Yellow and Stardust were used to try and liven up the Cricut cut. 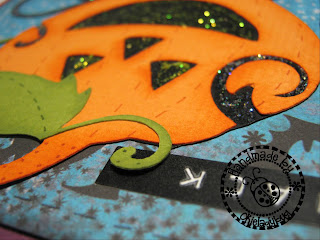 I inked the edges using Pumpkin Pie Stampin Up ink and used the same color marker to do the lines on the pumpkin. Old Olive was used for the leaf and swirl.

Looking at the pictures just now I think I do like this card, but this might be one of those occasions where the picture is better than the real thing!

Tomorrow I will be posting one more Halloween card and then it is on to something else!
Posted by okieladybug or okie_ladybug