I found this layout in one of my CARDS magazine's and thought it would be good for the Hello Kitty balloon cut. 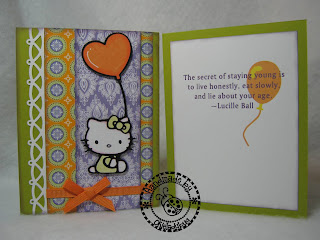 I do like this one better than yesterday's card, but it is still not on my "love's it" list.

I do like the sentiment for this one and it reads "The secret of staying young is to live honestly, eat slowly, and lie about your age. ~Lucille Ball". I just thought it was a fun sentiment for this card. I did the sentiment in Hallmark Studio so I was able to add an orange balloon behind the sentiment to tie it to the front of the card. I was on the phone with my friend Carol, aka Carol with two hearts, when I found this sentiment and she said she loved it also...of course that meant I had to use it!

The patterned paper is a sheet of Little Yellow Bicycle double sided Zinnia. I got it at 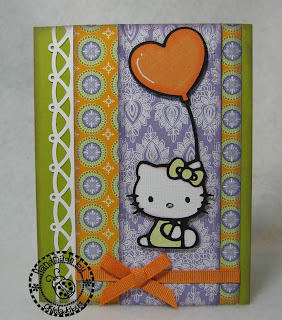 the Great American Scrapbook convention when I went to Arlington Texas in June. I was able to get a pizza box full of paper for $20. My only regret is that I didn't get another box full! My friend Linda, aka LGuild..aka my partner in crime, are looking forward to going back next year!

I did a straight stitch down the purple strip and then curled the edges up slightly. The border punch is a Martha Stewart punch.

I will tell you that I hand snipped some of the tiny pieces on the bow because it pretty much just put a hole in the paper because the cut was so small. Oh and for her nose I used Liquid Pearls, which was much easier than trying to use the nose that it cut.

Again the cut was pop dotted because you 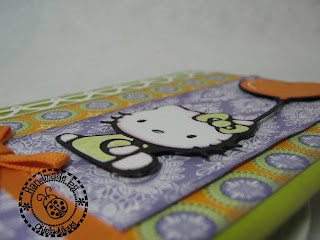 know how I love dimension! I actually do like the colors on this one and I think the patterns of the paper give it a sophisticated look but yet the balloon adds some whimsy.

Here are the files for yesterday and today's cards. It might be necessary to go in do "hide contour" on some of the cuts if they are overlapping. Sometimes the hide contour saves for me and sometimes it doesn't. So be sure to check and see if there are overlapping cuts.

Well this wraps up the Hello Kitty series! Tomorrow I will be starting a very short series of cards featuring.....oh come on guys!! You know I am not going to tell you!!!! *okie falls out chair laughing*
Posted by okieladybug or okie_ladybug