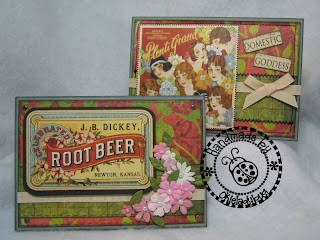 I had to make a bit of a larger card, I can't remember if they would be classified as an A7 or an A9. I am sure my friend Carol, aka Carol with two hearts, would know since she says she prefers to make the larger cards.

Since the images were so large there wasn't a lot of room for embellishment but I don't think they needed a whole lot. Just a little ribbon and some flowers made them look just fine.

The background paper is a piece of double sided and I chose it because I had a scrap to use and I thought the colors worked with the images.

The flowers on the Root Beer card are little Prima's with 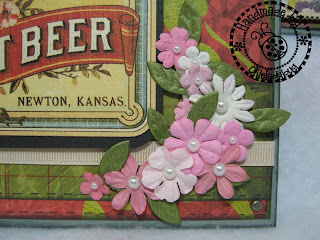 Paper Studio flatback pearls added for the centers. I tried to match up the flowers to the ones on the image but I didn't have the exact color. I cut a piece of chipboard, by hand I might add, in the shape of a crescent moon to add the flowers to so I could pop dot them. The leaves are actually some ribbon that I cut apart and added on the edges of the chipboard and then placed one behind a flower. 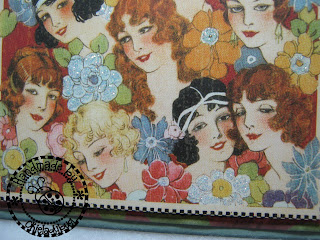 to the centers that were light colored. I know it is hard to see in the picture but it did make it really POP. Of course Stickles make everything POP! *okie thinks she will become a one woman campaign for Stickles and won't stop until every household in America has at least 3 bottles nestled in a corner ready to use*. I know I have mentioned it before but I shall mention it again, the reason I like Diamond so much is that it seems to pick up the colors around it. Stardust is similar but it has a bit of a green tint that shows through more.

This will be my last day of the Graphic45 cards since I am ready to get moving on to something else.
Posted by okieladybug or okie_ladybug

Email ThisBlogThis!Share to TwitterShare to FacebookShare to Pinterest
Labels: A2 Card, Vintage