Raven in a Tree

I have no idea what this Cricut cut is called but it looks like a Raven in a tree so that is what I am calling it *okie figures it's her card and she can call it what ever in the heck she wishes to call it and there is nothing anyone can do about it*. I think I might be feeling a little saucy!*okie cracks up laughin* And no.....I have not been drinking, well Diet Coke but that's it. However I told my friend Linda, aka Lguild, that I thought about getting drunk and making a video of some sort and calling it "The Drunken Scrapper". She kinda liked the idea, but she would since it would surely make an azz out of me.

Oh yes back to the Raven In A Tree card. The cut is from Celebrate With Flourish 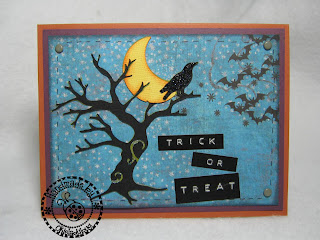 and will be the last from this cart for a little while. Again I don't know what the paper is that I used for the matting of the card, maybe Cosmo Cricket...and maybe not.

I do think the bats look better on this card than they did on yesterday's card. That raven looks like he is gonna eat one!

I have to tell you that the tree is a pain in the b-u-double T to layer! The little branches kept moving on me and it wasn't even windy! I would suggest gluing the moon down first and then doing the top layer of the tree so your branches line up right in the moon.

What do you mean you see Stickles? WELL DUH! OF COURSE 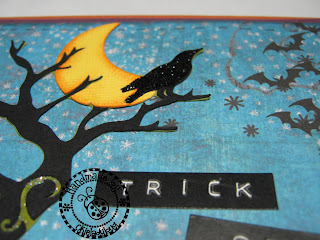 YOU SEE STICKLES! *okie rolls her eyes and sighs deeply* You know I love Stickles and will use them on anything I possibly can! And for those of you who don't like Stickles...I think you are seriously disturbed! Again with the Stardust this time and then I used Black Diamond on the raven. I inked the edges of the moon with some orange ink.

I also used some more of those stickers for the sentiment on this card. They have a slight embossed feel to them but they are not as heavily embossed as if you used one of those old fashion label maker things.

This is the last Halloween card for now. I think I am done with making series of cards for a bit and I am not sure what I will be posting next...guess you will just have to stay tuned to find out! *okie sure hopes she can think of something but right now her brain feels fried and can't think of a thing to make*. Maybe I will take tomorrow off crafting since it is Labor Day.....but I doubt it!

Since this is the last for this cart for right now I will tell you how I got the cart so cheap...EBAY BABY!! OH YEAH! There was an auction for Celebrate with Flourish and Lovely Florals. I won the auction and paid $52 for the both carts and that included shipping.
Posted by okieladybug or okie_ladybug