We usually have stamp club at the library but last week we had to have it at the scrapbook store, which is always dangerous! I think I spent too much time shopping instead of stamping! I only got one card done, well two actually, but they are just alike.

This card doesn't stink because of the image or sentiment, 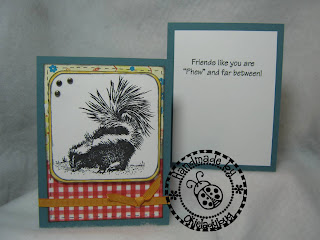 it stinks because the image is too big for the card! *okie sighs and shakes her head at her terrible card* When I got done browsing the scrapbook store Linda, aka LGuild, had stamped off a bunch of skunks and I thought her cards were cute and thought I would try one. Well her cards turned out a lot cuter than mine did!

I do like the image and the sentiment together and I think it might be a card I actually send out to someone. 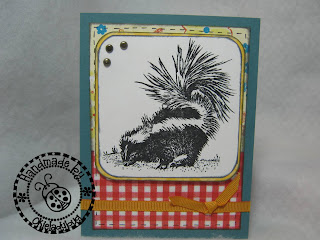 kinda help make it not look so stark. Maybe I should have colored a little bit too. But like I said....I was browsing way to much in the store. But to my defense I did have a $10 shopping card to use and that seemed a bit more interesting at the time *okie cracks up laughin*.

Later this week I will be posting some cards with some paper I got the night of stamp club. I do like those cards a whole lot better than this one!
Posted by okieladybug or okie_ladybug