Why do I give in to my daughter? stupid Tinkerbell!

I decided to let my daughter pick out a cart...she chose Tinkerbell and Friends. This was a few months ago and I just now got around to cutting something from it. My neighbor Naomi needs a card for her great niece who will be 4 at the end of the month and Naomi asked if I had anything with a princess. I told her I had Tinkerbell and she said that would be perfect.

OMG! Tinkerbell is very naughty! Her eyes are a pain to do. I tried to cut them but let me tell you cutting Tink at 5.5 they just ARE NOT HAPPENING! *at least for okie* I then tried coloring in the eyes with gel pens and totally jacked her face up. She looked something similar to the Joker from Batman. I AM NOT KIDDIN!!

Tonight I looked at her and thought I had to do something to salvage that poor fairy. I was able to get the head and arms cut off with some Undu and then cut them again. I used one of the ugly faces as a template and drew at the edge of the eyes and mouth with a .01 black zig pen, and then the bottom of the mouth the same way on white cardstock. I then colored the rest of the face black except where her mouth and eyes went. I used a SU marker for the blue of her eyes and for her mouth. Now that I got it figured out for the smaller Tinks it might not be too bad.

I haven't gotten the card done yet. But at least I have the Tink done now.

So without further ado I present TINKERBELL! You can click the pictures for larger image. 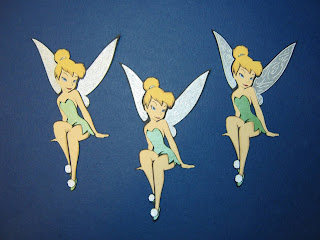 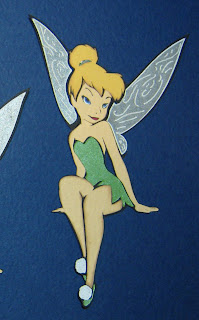