My friend Albert so generously sent me a Tim Holtz stamp binder and some refills for my birthday, well and some other goodies but this post is about the binder. I loved it so much I ordered 2 at almost half the regular price. It took me almost two weeks to get them but they were totally worth it! I spent about 5 hours organizing my stamps.

Here is my new 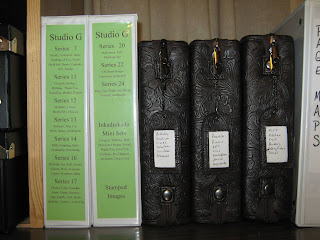 stamp organization. On the Tim Holtz binders I was able to write small descriptions on the tags. I can now look at the tags and grab the binder I need. I really had issues about breaking up sets but am trying to go by theme as much as I can as I do find it is easier to find things and I am less likely to overlook stamps I have. I also re-organized my Studio G stamps and put the series on the binder spines along with a small description. I like the small descriptions on the Studio G binders so I can grab those easily as well and not have to remember what is in which series. If you click the picture you will be able to see how I described the Studio G's a little better. I used Print Shop to do the spines and saved the file if I need to reprint them later on if I get more stamps *okie cracks up at the IF*. I think I do need to type the descriptions for the Tim Holtz binders, but will do that another day.

Here is the binder open. 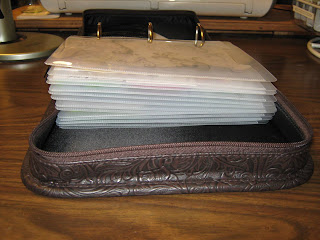 This binder has 13 sheets in it. I know in one of Tim's video's he said they hold up to 8 refills *okie thinks that Tim doesn't know how cheap okie is and will put as many as she can in one binder* but I got more than 8 in mine! HA HA HA I watched a video where Tim altered a binder with some of the Airdorandka paint daubers. I don't think I am brave enough to try that yet. He also said you could put rubons on the binders because "vinyl sticks to vinyl". Not sure I am brave enough for that either.

Here are two pictures of the binders open with the stamps displaying. Sorry the lighting isn't good. I didn't have my Sunlight Lamp of America on at the time and didn't realize until after I was editing the pictures. The stamps are so easy to grab now and I don't have to slide them in and out of pockets. 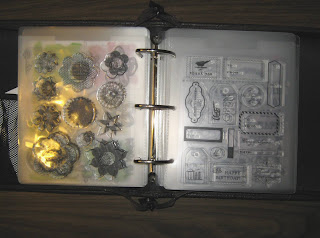 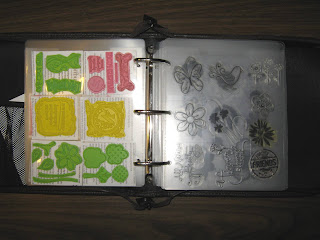