I've been working on this layout for the last week and it took so long due to the whole dishwasher saga and I finally finished it last night. I did enter it in the August Challenge on Graphic45's Facebook page and I really don't have any hopes of winning but it did give me reason to use the Gilded Lily paper collection I got at Scraptopia a few weeks ago and got my creative juices flowing again. I have done some crafting over the summer but it seems like it was all for others and nothing for myself so this time I was determined not to do anything else until I finished this layout. 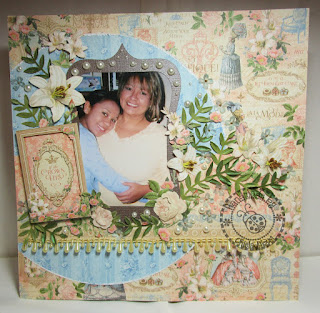 I wasn't sure I would like this paper collection when I saw it online but when I saw it in the store I thought it would be great for some layouts I had in mind. This is a picture of me and my daughter taken about 10 years ago and it is one of my favorites of us. I have had the picture stowed away just waiting for the right combination of colors and designs so I could do a layout and Gilded Lily fit the bill. I used the 12 x 12 and the 8 x 8 pads of the Gilded Lily paper. The only thing of the 8 x 8 was some of the flowers that I did the fussy cutting on.

The frame was cut twice and pop dotted. I also cut the inner frame and pop dotted it as well. I thought about doing the flowers on the frame but was afraid it would be too thick to fit in a scrapbook. I did double layer the outer frame to give it a little more dimension. The leaves were some I cut with a machine as is the frame that the picture is in. 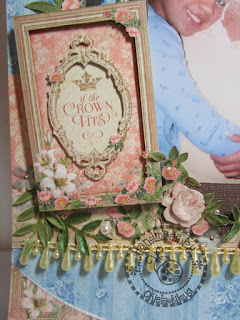 The dangling pearls were sewn on with nylon thread and let me tell ya somethin'...nylon thread is a pain in the arse! It kept getting tangled in the pearls and I thought I was going to end up trashing it but I persevered and got it done. *okie wonders which was more tedious...sewing with the nylon thread or cutting out that little frame*

There was a whole lotta fussy cuttin going on at my house this week and I had to wear my reading glasses to do it because if I hadn't then there would have been lilies and roses with half their petals missing! 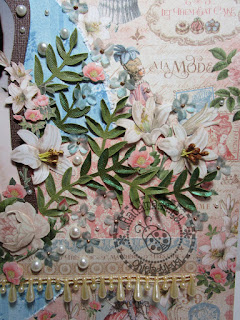 The little blue flowers are punched out of a material similar to vellum. I used a Perfect Medium brush pen to go around the petals and then added some blue Perfect Pearls. The centers were dotted with Brass Liquid Pearls. I like the softness of the flowers and how they worked well as fillers in a subtle manner.

I added some stamens to the lilies to give them a bit more dimension and just cut a slit in the paper and then on the back I glued a piece of paper over the stems of the stamens so they would stay in place. The curl in the leaves were just done by slightly folding them. 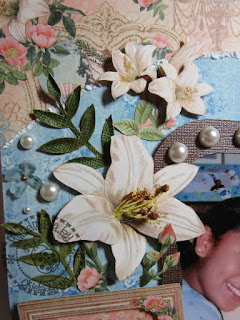 I'm a little disappointed that you can't really see where I used Perfect Pearls on the lilies, they do at least show up on the leaves a little. Somehow I've never used Perfect Pearls before, even though I've had them for quite sometime, and I was really impressed the with effect it gave on the paper.

I think I am ready to start getting back into doing some real crafting now and the Graphic 45 challenge was just the thing to give me that boost. Well okay maybe more crafting after I get everything settled with school and my schedule.
Posted by okieladybug or okie_ladybug