It's Been Awhile...Let's Catch Up

So I had a fabulous time in Houston with Carmen, two months ago now *okie hangs head in shame* and once I got back I got busy with decorating my kitchen/dining area and then they canopy got put on my deck and I was busy with getting it cleaned and stained *okie thinks she needs to break open that other an of stain and finish staining the posts and sides* and I just haven't been doing any noteworthy crafting. Although, I do have some layout designs that will be posted soon. And of course I have been organizing *okie listens for the shock gasps from the crowd but instead hears the chirping of crickets*...okay so maybe no one is surprised about that one.

I am going to make a confession here, I have a huge fear of commitment. That explains all my failed relationships but also many other things in my life, such as trying to decorate my house. I'm always afraid once I get something then I won't like it so my house has always been a bit sparsely decorated. I finally decided to go with a bit of a French Country theme for my kitchen I was able to start purchasing items and to be honest I purchased most of them at different Hobby Lobby stores while I was in Houston because Carmen and I found a few aisles that were either 80% or 66% off and let's face it...I LOVE A BARGAIN! 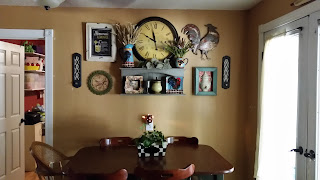 Almost everything in this grouping was purchased in Houston. The little shadow box on the bottom of the shelf was made years ago at a class that my friend Linda and I went to in Moore Ok. The little green jar was purchased at Goodwill here in Ada and the Pewter goblet next to it is from a Goodwill in Houston. I still have to finish the long blue pieces and I'm not sure if I will keep the picture in the frame that says Lemonade. I got it for the frame. The shadow box in the lower left of the grouping had mounting foam and burlap in it and when I found the pitcher urn thing at Goodwill I decided to take the burlap out and then put in some paper and added the urn. I got the large clock at a Goodwill in Houston and it was marked "as is, decorative only" and was 5 bucks. I know you can get the cloc mechanism pretty cheap so figured I could fix it. Once I got it back to Carmen's I took it apart and put a battery in it. I did have to adjust the hour hand but other than that it worked perfectly! SCORE! My friend Kat since me some wheat for the tall pitcher on the top of the shelf. The grouping looks like it's a little high on the wall but that is because I didn't want people banging their head on the shelf if they are sitting at the table. 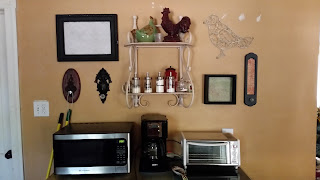 I wanted a shelf for over my coffee maker for my creamers and this worked great! As you see I haven't done anything with the frames I put up yet *okie wonders if anyone remembers the comment she made earlier about fear of commitment*. I may have told y'all but I don't remember so I will say it again, the creamer jars came from Ikea when I was in Houston in the spring and I cut out vinyl for the flavors of creamer. I got tired of trying to remember which one was which when it was time to refill them. The little green hen was purchased on the same trip from a thrift store. Everything else on the wall came from my trip in June and from Hobby Lobby. Oops, except the red jar behind the creamer containers, got it at Goodwill here in town.

I am quite proud of my decorated kitchen and dining area now. I spent less than $200 for everything in the pictures and retail it would have easily been over $1,000 *okie thinks decorative pieces are totally way overpriced*.

I'll post some of the other things I've been busy doing in the next few days. School starts on Monday for me and I will be swamped for a month and will likely need to do some crafting to de-stress in the evenings so hopefully I will be posting more.
Posted by okieladybug or okie_ladybug