When I moved into this house about the only draw back in my book was...NO DISHWASHER! My landlord told me if I got a dishwasher he would get it installed and I have been drooling over dishwashers ever since and just haven't had the extra money to put out to get one. 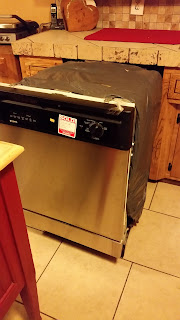 Well y'all know my love of Goodwill and finding bargains, right? It just so happens few weeks ago I found a Kenmore stainless steel dishwasher, which matches the other appliances in my kitchen, at Goodwill for $30.  I figured for the price I would take a chance and buy it and with my discount I paid $27. One of the workers told me that the man who dropped it off said it worked great and they were just getting new appliances or something. My daughter actually had to go pick it up with her car because she had a hatchback. Chuck and I rode in my car because I figured he would have to load it for me since I wasn't sure how heavy it would be. Chuck said it was really light but then again I think he can easily bench press over 200 pounds so I don't trust his judgement in that area very well.

I had to wait until this week until the landlord could send someone over to hook it up. Of course I could have kept bothering him about it but I was in no hurry really. The guys came Monday to hook up the dishwasher and everything seemed to be going okay until we turned it on and water was going everywhere. After some observation we pulled it back out and it was leaking from the upper arm mechanism. I think it probably got busted when one of us was trying to shove it under the cabinet, not realizing there was a hose at the top of the dishwasher because of the insulation that was wrapped around it. I was able to find the part online and order it without any problem and it was about $15 including shipping. They guys said to just call them when it came in and they would finish installing it.

The next problem was it was not draining. I spent almost every night this past week watching videos and reading websites about reasons a dishwasher won't drain. I took apart the inside of the dishwasher and cleaned off the piston valve *okie wonders how many people even know there is a piston valve in dishwashers* and it looked okay. Next I laid on the floor and watched the motor run while it ran a cycle. The dishwasher wouldn't run a full cycle either, it would stop and I would have to open the latch and then close it back and it would start back up. This would happen several times during a cycle and the dishwasher still wouldn't drain. I watch videos about circuit boards and motors as well. I even know where the solenoid is on my dishwasher, along with some other parts and wiring. I still couldn't get it to drain and kept having to bail out the water.

I finally decided too unhook the hose from under the sink and blow in it to see if it was clogged. I could hear bubbles inside the dishwasher where the water was standing so I knew it wasn't the hose. For whatever reason I grabbed a bucket and some bowls and turned the dishwasher to rinse and closed the latch and LO AND BEHOLD the damn thing ran a few seconds and then started draining! After it finished the cycle I opened the door and sure enough no water in the bottom. 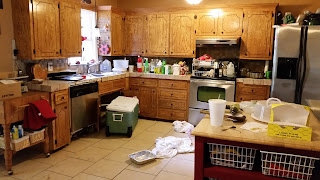 My next task was to see if the problem of the dishwasher not draining was also the cause of the dishwasher stopping during the cycle. I went outside and cleaned up my ice chest so I could bring it in the house for water to drain into because I was tired of sitting on a hard ceramic tile floor and didn't want to have to sit there with my buckets and bowls. This is a picture of how my kitchen looked while running a trial cycle and the dishwasher draining into the ice chest.

I am glad to say that with the hose in the ice chest the dishwasher ran just fine! Now  just have to wait until next week for the guys to come finish installing it and fix the problem with the drain under the sink. When I texted him yesterday that the part came in he said he would come this morning and do it but I told him not if it's his day off and he needs to spend that time with his family.

Now with a working dishwasher I might not mind cooking as much because clean up will be so much easier. Okay who am I kidding...I still won't like cooking!
Posted by okieladybug or okie_ladybug