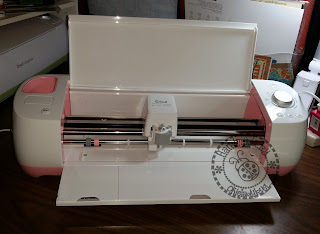 I got to choose the color of Explore One I wanted and I went with the pink since red wasn't an option. The other colors available were grey and blue. The first thing I noticed is that it doesn't have the pen holder like the Explore does but since I never used a pen in any of my Cricuts other than to see if it would work that doesn't bother me. I also noticed that the tab next to the blade is smaller which leads me to believe you can't do print and cut but I could be wrong about that since I haven't tried that feature.

I didn't have any problem popping out the bluetooth adapter from my Explore and putting it in the Explore One. My computer recognized it immediately as did Design Space. 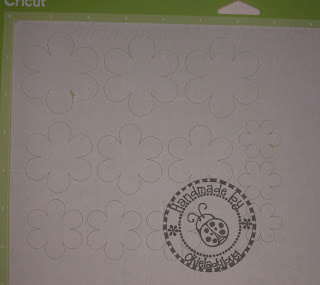 Of course me being me I didn't slowly try out the One, instead I went in with difficult materials that I knew other machines would have difficulty cutting or wouldn't be able to cut at all. For my first try at cutting I grabbed some onion paper, which is more delicate than vellum and didn't figure it would be able to cut it at all. I loaded up some shapes for flowers in Design Space, put the paper on the mat and tore the first piece and I think I might have gotten a bit of a grin like the Grinch Who Stole Christmas because I just knew if the paper tore that easily the Explore One was going to rip it to shreds! I wasn't smirking when I unloaded the mat, instead I was frowning a bit because it seemed that all the flowers cut rather well except the first one. 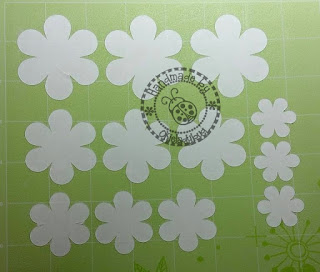 Well that frown went to an out right full force face of anger as I took the paper off and left on the mat were perfect little flowers. The first one on the mat was only torn on the paper I wouldn't be using. The wrinkle you see it is where I tore it getting the unused paper off the mat. I think I sat there for a few minutes just staring at the flowers and might have even scratched my head in wondering how in the hell did this machine cut onion paper...ONION PAPER OF ALL THINGS!! My punches won't even give me clean cuts like this with onion paper! 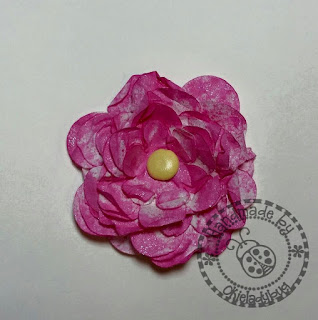 I went ahead and put the pieces together and made this little flower. I wadded up the layers and them straightened them out a little before layering them and putting them together. I spritzed it with some Glimmer Mist and POOF...a nice little Onion Paper flower!
Posted by okieladybug or okie_ladybug