For the final post about the tumblers we have Elvis and Music Notes! WHEW it's been a long week in the tumbler world hasn't it! 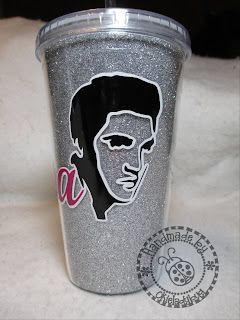 I searched for a nice image of Elvis and wasn't sure how I was going to do this but I am finding that silhouette's are rather easy to find and work with when doing people in vinyl. I started to do some editing and fill in his face but then I figured I would make him look deformed so I left the image as it was originally. I think it showed up well in the black with white shadow on the glitter cup. 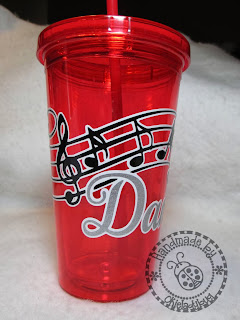 You can't see the full music scale on the tumbler because of the curve but it goes on around and finishes with another music note. I found this image on the internet as well and did the trace feature. Have I mentioned how much I love Make The Cut?? I had to do a shadow on the original because it cut too thin and the vinyl tore on the original one I cut but after adding a .110 shadow it was thick enough to cut but still thin enough to keep the delicate swirl image. I also used the "cut out" method with the name in the music scale. I really think this helps add to designs at times as it ties them together, plus I wanted to make sure I had enough room on the tumbler!