The whole challenge thing didn't have much of a turn out, think that is why I quit posting challenges long ago in different places where I tried because the participation was lacking for the most part. However, I did get mine done and two of my friends, Amy and Reddy got theirs done. I have never taken so long to get a dang project done in my entire life *okie knows she might be exaggerating a little* as I did this layout. I swear everyone called me this weekend and needed help with one thing or another and then I made soup and had to teach Chuck how to make Rotel Dip and there were other things that kept interupting me. Luckily I was finally able to finish.

Reddy is going to digital so the challenge gave her some experience in how to use SVG files for digital purposes. Amy hasn't crafted in quite awhile and she said it gave her the motivation she needed to get something done so with that I would say it was a success! 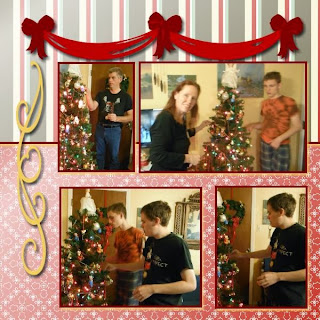 This is Reddy's digital layout. I am not sure what program she used for this but I do like how she was able to add drop shadows to the elements.

Reddy said she took all the pictures the morning she did the layout and I have to tell ya that is true challenge spirit right there! 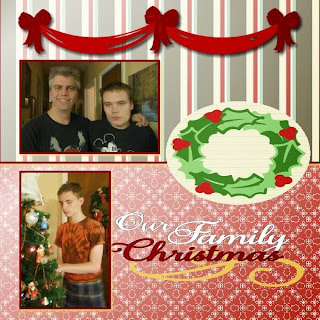 Here is the second page of Reddy's digital layout. She said she saved all the elements in different files and it was pretty easy to do *okie lifts one eyebrow and has skeptical smirk on her face and thinks Reddy's idea of easy is okie's idea of hard*. 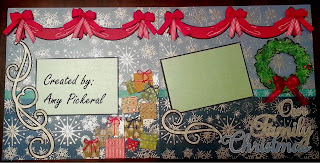 My friend Amy has been so busy with moving not long ago and then breaking her foot, with other life events tossed in there, that she hasn't been crafting and this has been the first she has done in awhile. Personally I sure can't tell she hasn't crafted in awhile because her layout turned out gorgeous! Here is what she said about it: "Girl! This thing almost killed me! LOL. That wreath was a PITA! It turned out so beautiful though." 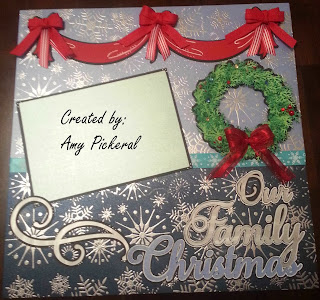 She definitely put some work into this layout! She said "I heat embossed the silver snowflakes on our favorite stardream paper so you can imagine the whole layout just sparkles." 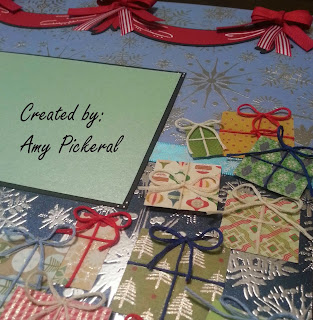 Amy added presents to her layout, which I think is an awesome touch! She said "The presents were just printed paper I had from some Christmas stacks and I used embroidery thread to make the "ribbons and bows" and the stardust pen to glitter them all up." 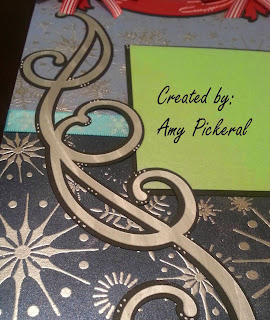 I like the dots she added to the shadow of the swirls, it really added some interest *okie thinks she might have to try this next time*. 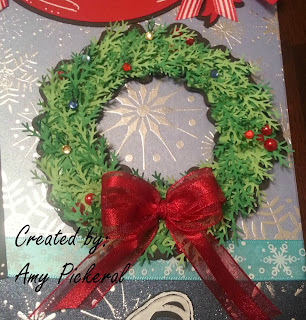 I can't imagine how much work went into her wreath! I did use the branch punch but my branches are not as full and lush as hers. Amy said "The wreath was the Martha Stewart branch punch and I used flat back pearls for the berries and hotfix stones and floral wire to make the ornaments...and of course I used your cut file for it all!" 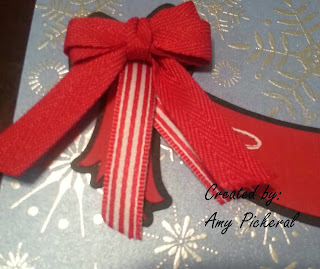 I like how she used ribbons for the bows from the file. I need to find out how she did a double bow because that was a fabulous idea and they came out wonderful! 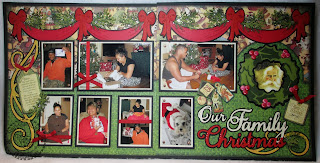 I decided to part with some of my fabulous Graphic45 paper for my layout. Okay I had quite a bit of this paper since it is from the haul I got while I was in Florida last spring so it wasn't quite as hard as one might think. I think the papers might have been from two different collections, I know the punch outs were not from the collection of the paper but much like Basic Grey, you can often interchange papers with Graphic45. 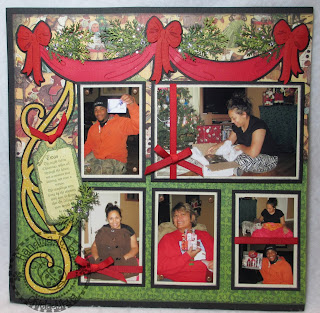 Here is a close up of the first page of the layout. I did print my pictures myself so I could get what I wanted. My printer, a Canon Pixma, does a great job. Look at the picture on the bottom right and you can see how I split that one to use two small pictures in that space. 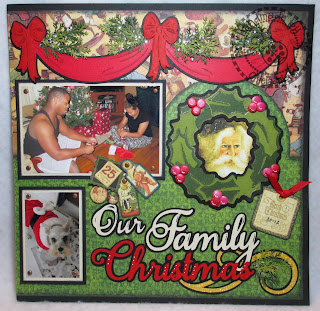 Chuck said he liked the layout but there was one problem with it, and then he covered up the picture of Lucy with his hand. Personally, I think he is just jealous of Lucy because he knows I love her best HA HA.

I used pictures from Christmas Eve and Christmas morning of the kids opening their presents. I didn't do any journaling because I didn't feel it was necessary for this particular project. 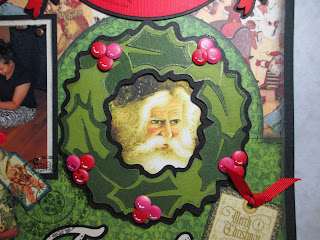 One of the punchout sheets had some pictures of Santa so I decided to add one behind the wreath and I think it maked it look better and not as stark. I used Candi for the berries on the wreath and then used my white gel pen to add reflection marks. I went around the edges of the leaves with a Stardust gel pen. 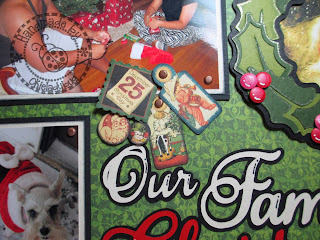 I did a collage of punchouts since I want to use some of the up, however this didn't even make a dent in what I have, but it does look nice and helped fill in that area of the layout.

On the title I did have to add some doodling with a black gel pen on the "Our Family" and white gel pen on "Christmas". Ya'll should know by now I always gotta add a little something, I think it is a sickness in me to have to pick up a pen of some kind and add dots and dashes. 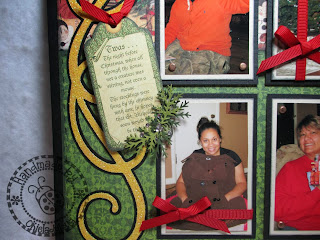 The tag was yet another punch out, did I tell ya I have a rather large supply of those things, and I added some branches to the bottom and a bow on the top. You can also see a little closer where I decided to add some ribbons and bows on the pictures. 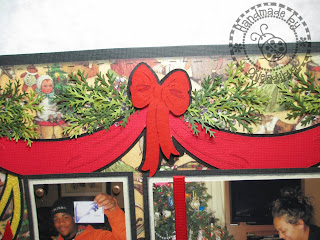 I had to laugh when Amy sent me her pictures and I immediately thought "GREAT MINDS THINK ALIKE" since I had added branches to my ribbon swags. I added crystal hot fix gems to my branches and I think I like the color ones Amy used better because they show up better.


My friend Carmen was working on her layout when I was writing up this post but I will be posting her version when she sends me the pictures.