Today's tumblers were one's that had me a bit stumped on what to do for the designs. After some thought and quite a bit of time searching I came up with a game controller and a silhouette. 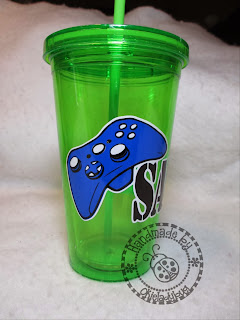 Once I decided on a game controller I had to decide which one to use. I never knew there were so many different types of controllers. I finally settled on this one because I could get a clean trace and I liked the way it looked. Once again I did have to do some "breaking", "joining", etc to get the file how I wanted.

I was pleased with the outcome in the end. 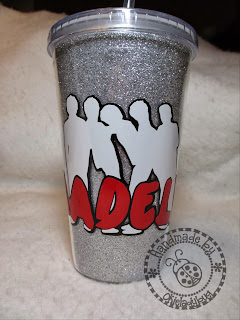 I have no idea who 1D or One Direction is but I do know they are a boy band. I wanted something that showed them and just not the name of the band since I was putting the name of the person on the tumbler. I found some silhouettes of the band and thought it would be a good representation of the child's interest and she would probably know who it was. Since the colors and design were rather plain I decided to use a glitter tumbler.

ONE DIRECTION
Posted by okieladybug or okie_ladybug