Have I told you how long it took me to design all these tumblers? Well it took a few days for sure! And that didn't even include the cutting and applying of the vinyl, especially with my habit of going back and changing files after I think I have the design completed! 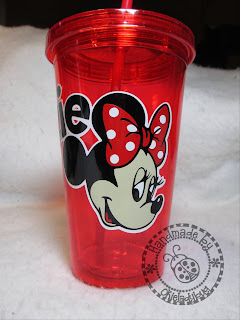 One of my favorites was the Minnie Mouse head tumbler. I was very lucky that I had just a small scrap of beige vinyl or I would have never been able to pull this off! I got the image from a clipart file and did a trace. I went back and added the dots on the bow and even warped them and did a few "cut out" edits to make them look more natural and not just circles. I used Mickey Font for the name on the tumbler. 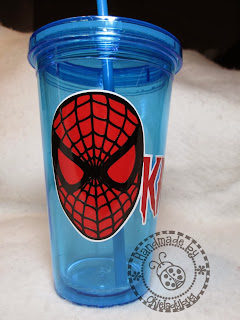 After my friend picked up the tumblers and I was editing the pictures for posting I thought "dang it I should have made the eyes white!" but it was too late to change it on the tumbler but I did go back and edit the file. I was able to find a Spiderman font on dafont.com and used it for the name on the tumbler. The image was clipart and I did a trace. I also did a shadow on the web layer because it was way too thin to get a good cut on at first. After adding a .110 shadow it was a lot better and much easier to work with. 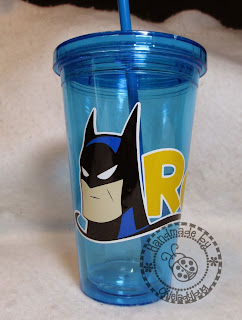 My original design for the Batman tumbler was the Batman logo, ya know the bat in the oval type thing. After doing the Spiderman head and the Minnie Mouse head I just thought it was a bit too plain so I off to the world of clipart searching I went! I did have to do some editing on the original clipart since it was in an oval and I didn't want the oval but thank goodness for Make The Cut and the editing tools I was able to get rid of the oval and just have Batman's head. I curved the letters of the name to match the flow of the cape a little. Again that little scrap of beige vinyl saved me on this! He might look complicated but he is actually very easy to cut!

The files used on the tumblers can be downloaded here: