Before Facebook became so popular a lot of kids were doing the MySpace thing. I even had a MySpace but quickly moved over to Facebook because I felt it was more simple to use.

Anyway I use to laugh at all the pictures my daughter would put of herself on MySpace and I decided to do a layout. I posted this layout a few years back but thought it was worth sharing again. 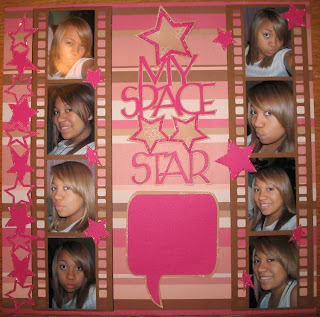 have had maybe 3 cartridges. The filmstrip was a .cut file that someone had made, I have since made a few of my own at different sizes. I thought the film strip was perfect for adding all the little photos. I was able to use my photo program to add all the photos on one sheet and print them at once. I think they might be around 2x2.5". I did add my journaling in the word balloon after taking the picture.


Years from now who knows that kind of social networking will be available and MySpace might be put in a time capsule and forgotten. But at least my daughter and I will always remember it!
Posted by okieladybug or okie_ladybug