I think everyone knows I love Tim Holtz products! If you don't then you do now! I have managed to get 4 of his stacks and have been refusing to use them. You know the whole "if I use it I won't have it anymore" mentality. I finally did break out one of the stacks to use on a purse. 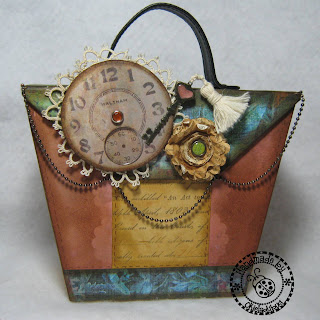 
Here is a close up of all the elements on the flap. The clock was cut out from 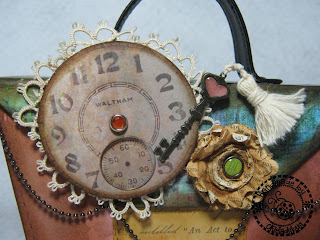 a sheet of the paper in the stack. I layered it with chipboard and a piece of the pink cardstock like on the front of the purse so it would have stability to stand up off the edge. I added a small doily behind it for the lacy look. Oh I added a small dome circle on the thermometer part of the clock.

The paper flower is book flower I made using a scallop punch and two different size circle punches.

I made the tassel on the key with some twine. 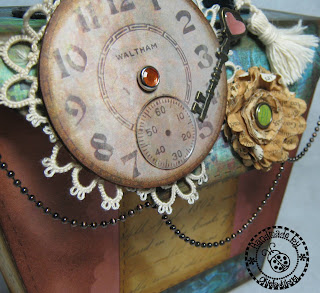 when I went back and added the ball chain. I thought about adding it just directly onto the flap but then I thought it would look so much better if it could swap from the flap.

You can see in this picture how it is just draping from the flap. Yes, it is okay for you to say right now "OMG OKIE!! YOU JUST ONCE AGAIN PROVED YOU ARE A CRAFTING GENUIS!" I'll wait....*okie waits for her readers to say the phrase...clears her throat and glances over to the right to the reader who is rolling their eyes and says...* Now now! Don't hate, just say it and we can go on... 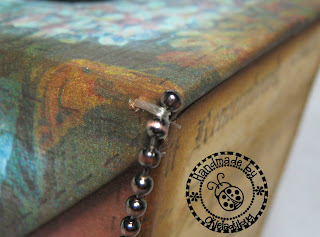 will likely be curious on how it was done. I used some nylon thread and a sewing needle, yep, that was the secret! I used my Tonic paper piercer to pierce through the flap so the needle would go through. Once I got the chain in place I made several passes through with the needle and thread so it would be sturdy. I then tied it with a square knot since nylon thread has a tendency to not want to stay tied.

While it is obvious in this picture how it was done you can't really see it when you are just looking at the purse in person. 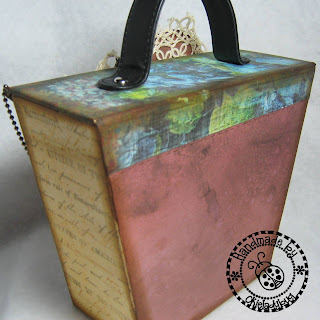 *okie thinks to herself very little effort* and I know I did it because it just seemed to need it with the vintage theme of this purse. I was going to add some brads across the back to make them look like rivets but I decided not to waste the brads since most people will probably never see the back of the purse *okie is so cheap sometimes it almost hurts her* and I figured why waste them!

I really do think it would look better to decorate the backs a little more but honestly I just can't see myself doing it! To me it would be like decorating the back side of a layout!

it on the paper. I then took my foam inking pad and inked out so it left the image of the scallop lighter.

I think it gave it a nice effect but I wish I had started on the outer edge and worked my way in, making more of the scallops. I might try this on another project in the future and see how it works out.

I still have two purses left to alter. I can't decide what I want to do to them so it might be awhile before I get them done. So far this one is BY FAR MY FAVORITE!!
Posted by okieladybug or okie_ladybug