By the time I got around to doing this card I was running out of ideas on how to embellish the cards so it's pretty simple. 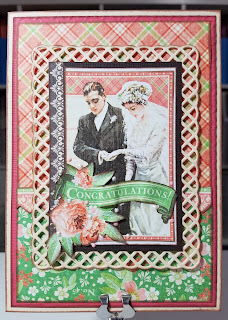 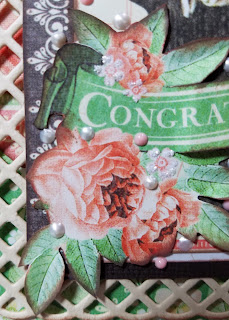 The "congratulations" banner was added over the main image and I made the banner "wave" by slightly bending in places and to make it stay that way I glued the the lower areas to the image.

The left edge of the main image was cut from another paper and was necessary to make the image fit on the die cut frame. 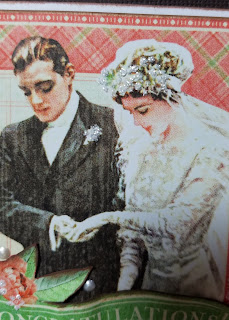 I know ya are probably tired of hearing about the Nuvo Drops but I just want to show you how awesome they are! The tiny flowers on the brides veil have teeny tiny dots of Nuvo drops on the flowers. I know it's hard to see in the picture but in person they show up nicely and really made the veil pop! Oh the groom's boutonniere has the same thing done to it.

You only have to put up with one more card from this series, which posts tomorrow, and then we shall move on to something else!