An Altered Frame For My Sister - Webster's Pages

I was transferring pictures from my phone to my computer and came across this picture of my sister and myself that was taken at her son's wedding back in September. I think it might be one of the only pictures we have together by ourselves and I decided to print it off and make a frame to give to her tomorrow while we are at our Aunt Betty's for Easter. Since she doesn't have the internet this will still be a surprise for her! I thought it would be nice if we both had one of these frames so I made one for myself as well...something I rarely do! I made a matching gift bag and card with the scraps left from the frames. 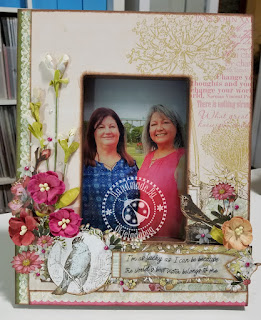 Hobby Lobby was having an awesome 75% off clearance sale about two months ago and I picked up a couple of packages of the Paper Studio Poppies and Paperie flowers. Of course I have a few flowers in my stash but for the 75 cents that was marked on the package I figured I could make room for a few more and I'm so glad I did because they worked great on the frames. I did use hot glue to attach the flowers as I have found that any other type of glue or tape just doesn't cut it in the long run. I punched out some vellum flowers using the EK Success small daisy punch and added dots of Nuvo Crystal Drops for the centers. I can't find a link for the small daisy punch but it is one of my go to punches for when I need a "filler" on a project, I actually have 3 sizes of the daisy punch and love each one of them! 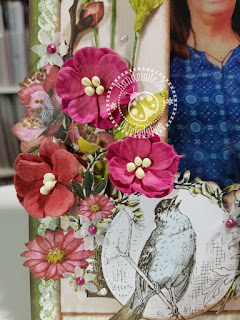 All the paper is from the Webster's collection and I can't rememember the name and forgot to look before I used the bottom strip as a border on the frames. I know it was from 2012 and was from one of their warehouse sales where you ordered a box for like $40 and got a TON of awesome stuff in the box. 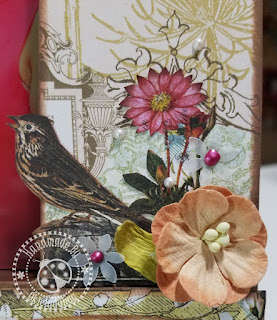 I didn't have to do a whole lot of fussy cutting on this project but I did do some as there were some good images to use that made the project just come to life *okie wonders if anyone notices she is just typing kinda random shit about the project to make it sound interesting, and then okie wonders if anyone really reads the shit she types anyway*.

I fussy cut the large border at the bottom of the picture area and used chipboard on the back and then some mounting foam because ya know I'm all about dimension when it comes to such projects! I printed the saying "I'm as lucky as I can be because the world's best sister belongs to me" on the vellum and I used my laser printer as it does an excellent job on the vellum. I don't think this is a true vellum, but more of a "kinda like vellum and better for what okie wants to use it for" kinda paper. 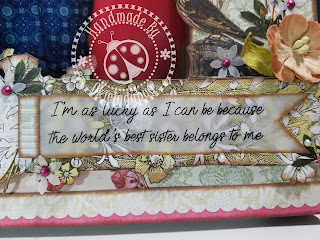 After getting the frames completed I made the matching gift bag and card with the scraps left over from the papers I used for the frames. I think my sister will be surprised and pleased! 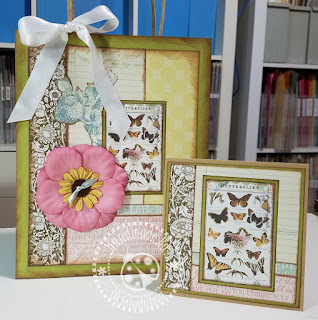