I did do a little crafting during the time of my hand surgeries and it was slow going and typing up posts for the projects were impossible at the time because I would have been beyond frustrated but now that I can type I thought I would start posting some of the things I have done.

I'll be posting a series of cards I did using Graphic 45 Time To Celebrate. I got a couple of these paper pads sometime back during one of my trips to Houston and just knew they would make easy cards. Easy is not a word I would use now since they required a fair amount of fussy cutting and I only made 2 of each card...yes TWO! My hands wouldn't let me do the labor required to make 6 of each. 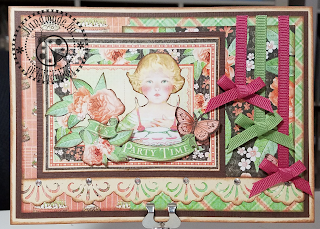 Instead of the regular A2 size card I made this series bigger and opted for 5x7" since some of the images were too large for the 4.25x5.5" area of the A2 cards. This also gave me more room for layering some of the gorgeous paper. The border at the bottom of the card is actually cut in half from the Medallion Chain Punch. Since half of it was going to be mostly covered I didn't see the sense in wasting it *okie knows she is such a cheap azz sometimes*. 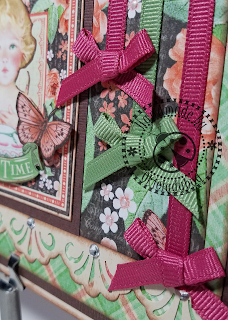 I believe the colors of ribbon are Moss and Deep Mauve, I'm too lazy to get up and check right now. Even though the pink looks too dark there is some darker pink on the plaid paper and I tried some lighter pink but it just looked a bit washed out. I had to stagger the length so the bows wouldn't over lap too much and cause the card not to fit in an envelope well.

I absolutely love some of the cards I see with all the embellishment but my practical mind won't let me partake in such things because I always think "well that won't fit in an envelope" and if I would allow my mind to think further I would realize that I rarely send out the cards I make and they sit in a box in my craftroom closet so embellishment probably wouldn't be a problem! Please tell me that other people have the same thought about embellishment and then not sending out cards. I do give a lot of my cards away for others to use so maybe I am justified after all. 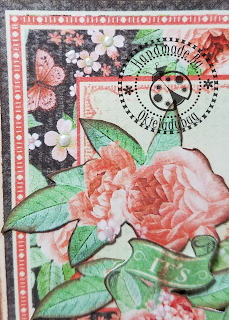 If you look closely at the little flowers you can see the centers are done with the Nuvo Crystal Drops. People if you have not tried the Nuvo Crystal Drops then you are missing out! I have tried many different type products such as the Viva Decor and the Liquid Pearls but the Nuvo are the best I've ever worked with! The bottle squeezes nicely and instead of the pointy tops like I tend to get with the Liquid Pearls I get nice round tops.

I think I still have 11 different cards from this paper that I will be posting so be sure to come back and see the rest of them!
Posted by okieladybug or okie_ladybug