Ya Know I Hate Cooking!

I mean I really despise it. I am not sure why as I use to enjoy it but I think after the two years I spent living alone I got spoiled to not having to do it and it was nice not to have to do a bunch of grocery shopping, get out a bunch of stuff to cook and then clean up afterwards. I actually think food is probably the biggest waste in our lives *okie figures in her case that should be "the biggest waist"* since we have nothing to show for but eventually a pile of chit! Did I just cross a boundary there? *okie shrugs her shoulders and sighs* Oh well, that is what I think about it.

Anyway, I have been trying to come up with some different things to cook and on my last trip to the grocery store I even got some rosemary, garlic cloves, red cooking vinegar (I actually meant to get cooking sherry) and some balsamic vinegar because it seems like recipes I see call for these things. When I was in Florida my BFF Karen made a porkloin that had rosemary on it and I loved it. I have been trying to remember to get a porkloin and try it and I finally got one this week. 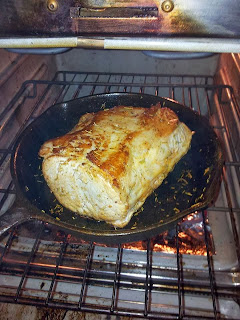 I looked at several recipes and I also asked Karen how she cooked hers and then I came up with my own method using all the ideas I read. I cut slits in the roast and put in garlic cloves and then I mixed up some Sea Salt, Paprika, Rosemary and Black Pepper and rolled the roast in the mixture and patted it on good with my hands. I heated a cast iron skillet on the stove with some EVOO and when started to smoke a little I put the roast in the skillet and pan seared, even holding it on it's end to make sure all sides were seared well. I left the roast in the pan with the fat side up and then cooked until the internal temp was at 150 degrees, think that was about 50 minutes or so, I checked on it at 20 minutes and then 40 minutes with the thermometer. 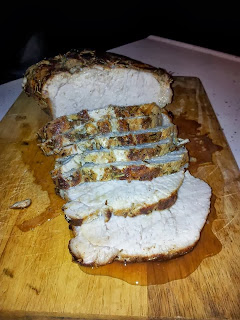 Once the internal temperature was where I wanted I took itout and let it sit for about 15 minutes before slicing. I was concerned about it being too dry but I didn't need to worry since it was nice and tender. I think pan searing and cooking fat side up helped.

As you can see in the picture it was very juicy!

I did make a little sauce with the pan drippings, water, flour and a touch of Worcestershire Sauce. It was a little bland but with the flavor of the meat it was still okay. 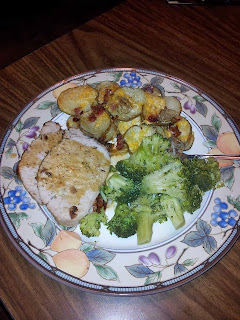 To complete the meal I made some Easy Bacon Cheddar Potatoes and steamed some broccoli. The potato recipe called for chili powder and I am not a big fan of that spice unless I am making chili instead I tossed my sliced potatoes in some Tony Chachere's Creole Seasoning.

I wasn't sure what the kids would think of the meal, the broccoli I knew they would like and figured they would like the potatoes but the roast I wasn't so sure about. It did get the thumbs up from both of them. My daughter said "it tasted different, but a good different". Guess maybe I should cook more often...but, NNAAWWW! Still don't like doing it! HA HA HA
Posted by okieladybug or okie_ladybug