My Daughter Got Crafty

I came home the other night and there was a diaper cake sitting in my dining room. At first I thought my daughter might be trying to tell me something *okie won't mention that she almost fainted and fell to the floor at the original thought she had* but then remembered she mentioned she had a baby shower to go to and I figured she must have decided to get crafty. 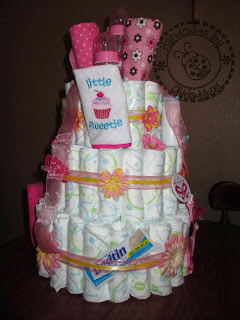 Looking at her work I was rather impressed and didn't even know she knew how to make such a thing, later finding out that she learned how to do it, from her words "the internet". I noticed how nicely all the diapers were rolled nice and neatly the same size and how wonderfully all the items were placed in adorning the "cake".

As a life time crafter who has raised their child in a home where there was always some kind of craft being made, I have to say I did feel a little wash of pride flow through my body. When I first started paper crafting I had high hopes of my daughter and I crafting together. Now she will tell you "I can do all that stuff mom does" and I am quite sure she would give it a go but what she doesn't realize is that a lot of stuff that mom does comes with years of trial and error and a lot of patience, something my daughter seems to lack in most areas.

With that said, I do commend her staying with the project and finishing it, especially when she told me "I am never making another one of those! It took 3 hours to make that thing". Remember what I said about patience, or lack thereof HA HA HA. 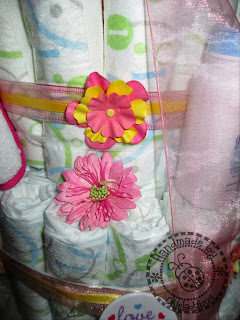 As I examined the cake a little closer I started recognizing some things on the cake! She had used some of my paper flowers and brads!! I wasn't too concerned about the brads since she used simple ones but a few of the flowers were ones that were not cheap flowers. She told me she would pull them off and I told her "you can't, you hot glued them on there" and she said "no I didn't...I used your really good double sided sticky tape". I don't think she realizes paper flowers can be rather delicate! LOL After accepting that those flowers are now basically dead and gone to me I am still so proud of my daughter's handiwork!