Let me share a little story about what happened at my house last night.... 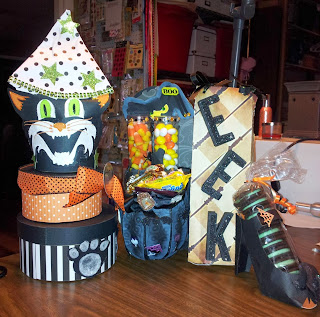 My friend Rosemary sends me care packages for holidays and for Halloween she sent me a box of wonderfully packaged candy treats. I was amazed at the great packaging she made, as always they are just over the top!

When Shiane came in and saw the packages she said "what is that?" and I told her "care package from Rosemary" to which Shiane squealed "ROSEMARY IS MY FAVORITE!!" and she started digging through the candy. I told her to get out but then I made a mistake and read the note Rosemary and included that said "I gave you plenty so there would be enough for the kids". Sounds pretty nice and simple doesn't it? Well some how this turned in to THE CANDY WAR!!

I had given the tube of candy corn to Chuck and to be fair I gave Shiane the tube of white chocolate M&M's. I also gave Chuck some of the other candy as Shiane had gotten some earlier. Well Shiane's friend Alicia had come over for supper and she said something about stopping on her way home and getting some Twix and Kit Kats. I told her "hey go get some from Chuck, he had plenty". When I went to tell Chuck something I had seen he had a little tackle box looking thing full of candy and I told him to give me my candy back, which he refused to do so I though telling Alicia would get back at him a little.  I took the dogs outside and soon heard commotion from inside the house...running, laughing, yelling, smacking... 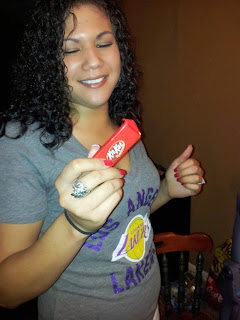 When I came back in I saw Shiane shoving candy down her shorts and Alicia saying "this chocolate is going to melt in my bra". As you see from the picture Alicia did get a KitKat!

Chuck came in the kitchen telling them to give him his candy, holding his little tackle box thing tightly so they couldn't get it. Both of the girls were laughing at him and told him he had enough candy and they weren't giving it back. By this time I had gone to the craftroom and Willy Wonka followed me and had lain down at my feet. I heard him chewing on something and he had a packaged gummy eyeball. I took it away from him and went to tell the kids to be careful. 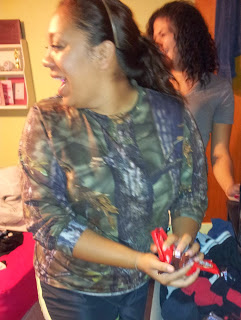 When I went into the bedroom, of course I was still hearing laughing and thought I better take my phone with me in case more pictures needed to be taken and I saw Shiane getting into Chuck's dresser and finding his stash of candy, as you can see by her hands she was grabbing it by the handfuls! You can see Alicia in the background encouraging Shiane to keep taking more!

There was a short melee of the kids chasing each other through the house. I heard them going into and out of bathrooms, cabinet doors opening and closing, dryer being opened and shut, fridge being open and shut and several other things I couldn't quite identify and I knew the chase of finding the candy on. 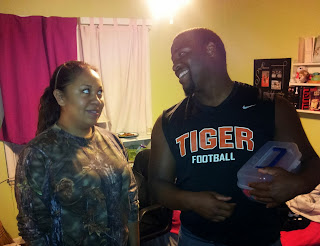 I thought things settled down as the kids got kinda quiet. A few minutes later I hear "MOOOMMMM!!!" and I go back to the bedroom and Shiane tells me "CHUCK TOOK MY PHONE!" and Chuck was telling her to give him his candy back. Shiane said "I was tweeting!" and Chuck's reply was "well tweet my candy back in my box and you can have your phone back" at which point I cracked up laughing and retreated back to the craftroom. Well the dogs and I sat in the craftroom while the kids were chasing each other like crazy through the house yelling about candy and phones. Eventually they settled down but I never did get it straight where the phones were hidden or if Chuck got his candy back!