I got a new camera back in the spring, my camera was having a few problems and I wanted to make sure I was able to take good pictures on vacation. After some research I decided on the Canon A4000 IS because of it's size and zoom ability. Also I do like Canon camera's and that is what my last two camera's were and I trust that brand.

I wanted to share some pictures I have taken with the camera with the zoom being used. I am really impressed with this little point and shoot camera! Now mind you these pictures are of moving objects so of course blur is going to be a problem. One of the hard things about taking pictures at football games, at least for me, is that I never know if I get a shot or not until I come home and load them onto my computer. Since I am out in the sun and there is a glare it is hard to check and see if I got a shot and I also don't want to spend time checking and miss another shot. I probably take anywhere from 60-80 pictures at Chuck's football games and usually end up trashing about 75% of them. But isn't that one of the great things about digital? 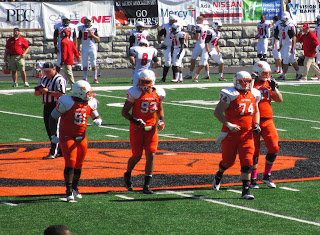 This picture was taken of Chuck and the other team captains right after the coin toss. They are in mid field and I am sitting around the 30 yard line up in the stands, I would say probably a good 60 yards away from them and the picture has been cropped.

You can click on the pictures and make them bigger if you would like to see more detail. 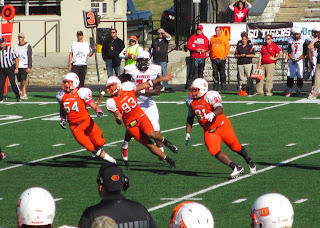 I was really surprised at this picture when it came up. I love the action shot and can't believe my camera caught it so well. This one is actually one of Chuck's favorite pictures. Oh and Chuck is number 91, the one on the right. I really like how this one shows how fast these big boys can turn and move. I am probably a little over 60 yards away from the subject on this picture and it has been cropped to get in closer.

Anyway if you are looking for a good little point and shoot camera that will easily fit in your pocket, take great pictures and has a great zoom I highly recommend the Canon line. This particular camera can be found for right around $100 so it won't break the piggy bank either.