Stampin Up MDS...Love the SVG's!

I have been busy working on some Wall Quotes for the craft fair and I hope they are going to sell, if not I guess my walls are going to be covered from top to bottom!

One place I have gotten some ideas for Wall Quotes is actually Stampin Up's program My Digital Studio. Everyone knows I am a fan of SU and I have quite a few stamps, just a little cardstock and a few punches from that company. They had special on the software and I got it sometime ago but just recently started playing with it due to it having some of the images in SVG format and I am really lovin some of the SVG's that are available!

The tutorial I posted last week was actually from that program but I wanted to show you a few more!

This one is from the Fantabulous You set and of course I am sure ya'll recoginze the quote from Toy Story.  One of the things I find myself doing is making the letters a little thicker by using the shadow feature in Make The Cut so the words are a little easier to cut and weed and also show up how I want them. 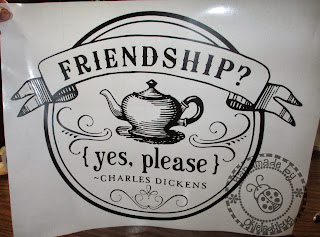 This particular one is from the set From My Heart and I had to do some tweaking on the scroll work as it was a little too detailed and I knew I wanted a cleaner cut than what I would have gotten. I used some of the swashes from the Samantha font for this purpose. I think this one would look great in a kitchen or dining area.

Now I am quite certain this came from Stampin Up but I can't remember what set it is from and I also didn't find the information when I did a very weak search in my list of files. I did add some circles in the ampersand because I thought it added a little something extra.

I'll be posting a few more wall quotes this week that I have gotten done. I am trying not to do too many duplicates of the quotes but some I just think need to be done twice.
Posted by okieladybug or okie_ladybug

Email ThisBlogThis!Share to TwitterShare to FacebookShare to Pinterest
Labels: Stampin Up, wall quote