In the whole commotion of not making blog posts for awhile I have forgotten what all I have told ya'll and what I haven't so if I start repeating my stories like your great aunt does please just nod your head and smile and act like you haven't heard it before!

I thought I would share some pictures of the ECU Homecoming weekend when Chuck's family came to visit. Now I did warn them that I have a website and I told them I post a lot of stuff on it and I hope they understood they could become a part of this...uh...need to for me to share my life with anyone who can do a search on the internet *okie suddenly thinks it might be a good idea to carry around release of information forms with her and have people she knows and meets to sign said forms*.

Chuck is from Mississippi, the delta area I believe, I don't know really but that sounds really cool so I will stick with that, and evidently his idea of cold and our idea of cold is very different. I told him to call his family and let them know it was going to be cold the weekend they were to be here and he said he did. After they arrived his mother told him "YOU DIDN'T TELL ME COAT COLD" and they only brought some very light weight jackets. Needless to say this caused a trip to Walmart for some sweatjackets and hoodies so they would have appropriate apparel for the football game. 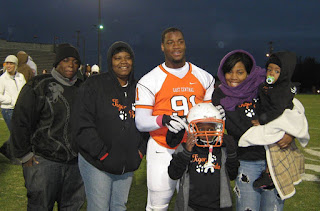 Luckily I hadn't done the iron on vinyl on the t-shirts yet so I was able to quickly make the change to the sweatshirts. I know I posted a picture of them hanging up but here you can see them on his family. I didn't get a picture of them showing the back but they each had his number and then said things like "mom" "sis" "nephew" etc. They were all thrilled with the design and being able to show their support for Chuck. 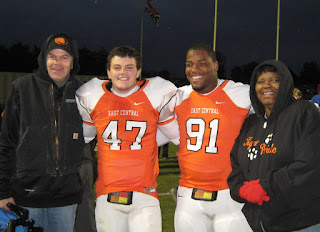 I was able to get quite a few pictures after the game and of course you know I gotta scrapbook them! I love this picture of Chuck and his mom with Chuck's friend Blake and his dad. Blake hung out at the house a bit this summer while the boys were going to summer school. He is a great kid, although he won't share his food...at all...never *okie giggles remembering Blake taking his plate of Monkey Bread out the door with him and bringing the plate back later*.


When I first talked to Chuck's mom on the phone about them coming for homecoming she wanted to know what motels we had here because her sister, who didn't get to make it, could get a discount if we had that chain. I told her "OH NO GAIL! I can't let you stay in a hotel! My Momma would roll over in her grave if I did that". I told her it might be a tight squeeze but they were going to stay here at the house and that way they would be able to visit with Chuck the whole time. As you see even the living room floor was taken! There was also a queen size blow up mattress in there for the younger boys.

When they first came in and all the introductions were made I told everyone "there's the bathrooms, there is the kitchen...if you want anything you will have to get it yourself because I don't wait on no one. You gotta make yourself at home here or you will starve".

I honestly think his mom and sister would have liked to stay longer just so they could look around my craftroom some more *okie cracks up laughing remembering them going from one thing to another asking what it was for*. Oh and the little boy in the football helmet in the first picture, his name is Tink, he was mesemerized by the Cricut and all my supplies. He came in while I was cutting the vinyl and asked "do you sell stuff". I told him "no, it's all stuff for me to use". Tink's eyes got really big and he scanned the room slowly and said "WOW! You got a lot of stuff".