Well it is Friday and it is time for the Fabulously USED giveaway!! If you are one of those people who doesn't like to get something that is USED then I ask that you leave now and don't come back for a few days because today is all about the...

I know some of you know what I am giving away because I had asked some opinions about it in the Cricut Circle. Everyone thought it was okay as long as I tell you the product I am giving away is USED. I don't want any confusion about this being a brand new product because it is USED. I thought if I said they were mine to begin with people would understand that the product is USED. But just to make sure everyone knows it is USED and not brand new I am repeating myself. I would hate for someone to win and then be pissed off because they felt like they were not told the product was already USED.

So here are the pictures of the giveaway... 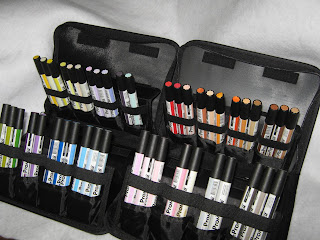 
So is everyone clear that this is a giveaway for USED products?? Here is the reason I am giving these away...

I was contacted by Letraset a few months go upon referral from a crafting friend. They asked if I would be willing to try their product for review and use. I told them that I would be honest and if I didn't like it I would let them know and would give them the choice if I wrote a review. Paul, from Letraset, was so confident he told me he wanted me to post my honest review for all to read. Well that sly Paul knew I was gonna love them! *okie cracks up laughin*. Actually he told me he was confident enough about his product that he thought I would really like the ProMarkers. When I received the markers I was thrilled, as most of ya'll know, and I was so thrilled that I ordered more from Carpe Diem. I guess Letraset liked what I was doing with the product and they decided to bless me the full set of markers!! That left me with duplicates. I let my friend Linda, aka LGuild, pick some of the colors that she didn't have. Then I wondered what to do with the rest...

Then I thought it would be great to give them away on my blog!

So now ya know the reason I want to share the blessing and giveaway these USED ProMarkers.

Enter only once. I have to approve comments so it may take awhile for your comment to appear but it will finally appear. Now here is what you need to do to enter...read and follow carefully because if you do not follow exactly you will be disqualified. In this post comment (must be comment on this post and not in email form) and answer the following questions at least semi-correctly and in order...
1. What is the number of ProMarkers available from Letraset?
2. What ink works best with ProMarkers?
3. How many markers are in the giveaway?
4. What has been your favorite ProMarker project I have posted?
5. Why is okie so awesome? *okie figures there are no wrong answers on this one and everyone deserves an easy answer question*

The deadline to enter is Sunday April 10th at midnight. I will post a winner on Tuesday April 11th. GOOD LUCK GUYS!!
Posted by okieladybug or okie_ladybug

New comments are not allowed.