Easter Cards Made By Clients

Sorry it has taken me so long to get the pictures posted. I was very busy the last few days working on layouts for the HSN E2 contest. I actually got 3 done but then I found out that beech Monique Griffith of Monique Griffith Designs is entering so I think I will just go start a fire with the layouts I made!! *okie so hates Monique and all her fantastic talent*

Oh but back to the cards...

My clients had a blast making the cards and now they are asking about making birthday cards. I told them we would do that either in May or June.

Here you can see where they are signing the insides of their cards. 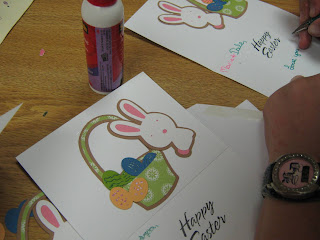 I guess you can see my favorite glue in the picture!! I did have to work with them on how to squeeze the bottle SLIGHTLY after one of them gave it a good squeeze and glue went flying across the table. Luckily it was before anything else was on the table so nothing got ruined. 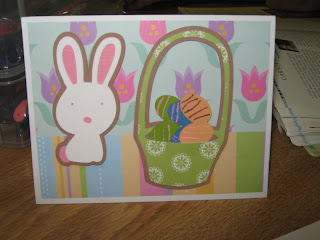 My Kitchen cartridge. A few chose not to decorate the eggs but most of them did. They really enjoyed going through and looking for colors to use. I did have to keep reminding them to put the lids back on the pens and during my last group one of the ladies went through the pens and found 3 that didn't have lids and she chastised the group for putting them back in the container without a lid *okie laughs about how her clients will reprimand each other* and told them "Shirley won't let us do this again if we don't treat her stuff right!". 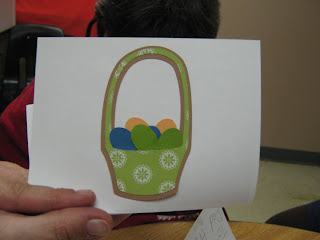 the fronts and insides of the cards since I had cut extra images and I told them they could use what they wanted that was left over. Most of them in that group chose to make an extra card.


I did have the bunnies and baskets all put together. I only have an hour with a group so 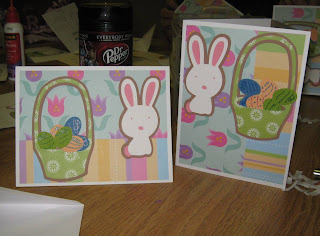 I needed to make it a little easier to put the cards together. Some chose to have me put the mounting foam on the back. Which was rather humorous because I forgot to tell them they needed to peel the back off the little pieces of mounting foam and they couldn't figure out why the images weren't sticking.

I told them to be creative and make their card how they wanted when several kept asking if theirs was right. I let them know that in card making there is no right or wrong "there is only the masterpiece you create" and they seemed okay with that.

It can be a lot of work to get stuff ready for 30-32 cards and wondering if I got it easy enough to complete in an hour but artistic enough to have them feel they did well, but it is worth it when I see the pride on their face of how they made a card.
Posted by okieladybug or okie_ladybug

Email ThisBlogThis!Share to TwitterShare to FacebookShare to Pinterest
Labels: A2 Card, Easter