I have been so busy getting ready for my cruise *okie starts to mentally go over her packing list and shakes her head and figures...if it's packed it's going and if it isn't then it's staying* that I haven't had much time to craft. I think in the last two weeks I have done two layouts. *okie almost faints at the lack of crafting time*

This is a layout of my daughter and her father. She was 3 when the picture was 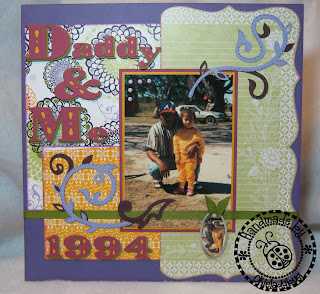 taken. It was actually his picture but he let me borrow it and scan it so I could make a layout for my daughter to have. 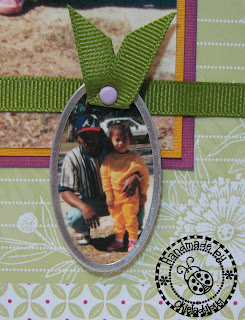 I still love them! Matter of fact a friend from the Cricut messageboard, Angela aka TiffysMom, sent me a bunch because she said she doesn't use them anymore.

How I used it here is how I usually like to use them. I think they are great to make little picture charms. Sometimes I do just a face or an interesting point of a picture. For this particular layout I thought a tiny version of the picture was the best.

I didn't have a template to cut the picture so I just used a ballpoint pen to trace around the outside of the rim and then cut inside the pen line a little. I did have to trim a little at a time to get what I needed but it was worth the effort. 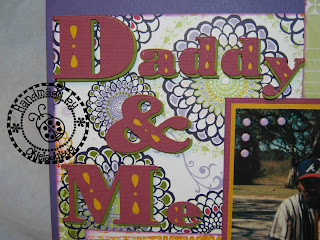 Cricut lover friends will understand wanting a cart for just one cut* but once I saw the font I knew it was a MUST GET CART!

The one thing is that the font doesn't have a shadow but you guys know the routine, cut a base layer then offset it to get a shadow effect *okie knows she is addicted to layering in paper crafting*.

I will be posting another layout for tomorrow and after that since I will be reposting some of my old posts that some of you guys might not have seen. I likely won't be able to publish comments until I get back but I will read them when I get home.
Posted by okieladybug or okie_ladybug