When Carmen came to visit back in March she brought me a mini album kit she found at Goodwill because she said it reminded her of me and she likely wouldn't ever put it together anyway. I had posted this on Facebook and my Aunt Betty said she loved it and that gave me the idea to scour my computer for pictures, print them off and then give the to my Aunt Betty and that is just what I did. She LOVED it!! Of course the pictures I have of the album don't have the family photos I put in but at least you can see how it looks. Oh and since it was a kit Carmen brought me I only made one...yes you read that right...I ONLY MADE ONE! 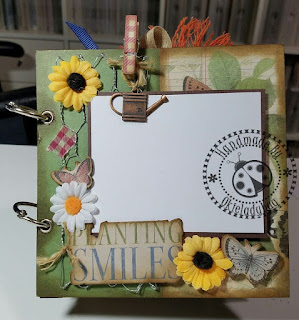 Pretty much everything the album is decorated with came with the kit. I think I only added some twine, washi tape, a bit of ribbon and stamped a few things, which may sound like a lot but it really isn't.

I had the chicken wire ribbon from another project and it went nicely on this album with the garden theme. The cover photo was one I had of my Aunt Betty and Uncle Perk from a Thanksgiving probably 10 years ago. 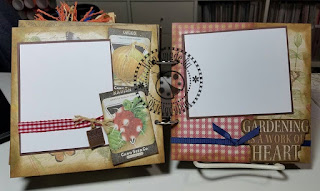 I used my own ribbon on these pages but the other elements were in the kit, including the little charm. I think the seed packets were some of my favorite elements in the kit. 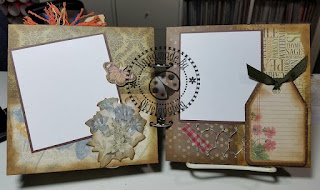 I tried to use as much of the kit as I could and there was a lot of chipboard elements that I could use and I still ended up with a few left over. 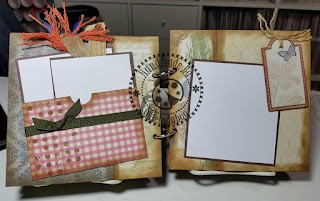 The gingham pocket was included and I used a Bo Bunny background stamp to it for a little more interest. One of the tags in the pocket has Maya Road twine and the other has some burlap ribbon, which I wish I could find more of....I really like that stuff! I like the elements that had open space so Aunt Betty can add a little narration about the photo on the page if she so desires. 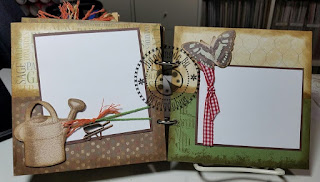 Sometimes I have a hard time remembering it's okay for elements to overlap pictures and I had to accept this with the watercan chipboard image because I really wanted to use it! I tried to keep the picture areas fairly large so I could use just about any photo I had to put in the album. 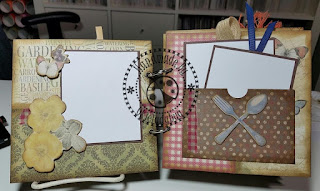 I wasn't so sure about the fork and spoon chipboard image but it did work out okay on the pocket. I loved the image but wasn't sure it really went with the whole theme but since we eat what comes out of a garden I could justify using it.

Trying to keep things interesting in mini albums is sometimes hard for me and I think it is because of the small size as well has having to come up with so many different looks so pages don't seem redundant. 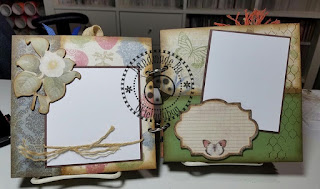 Another thing I had to watch for while using the chipboard images was placing them so they didn't stack on top of each other when the album was closed so it would cut down on the bulk, it takes a lot of finagling *okie is shocked that finagling is an actual word and knows it has to be because she didn't get a red line under it when she typed it* due to the different size and shapes of the chipboard. 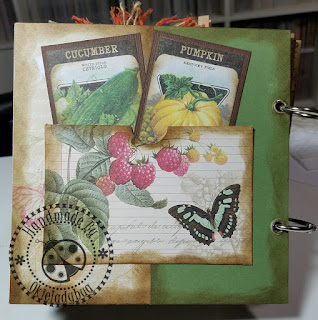 On the back I tried to add something interesting but with no elements popping up so they didn't get torn off during handling.

My Aunt Betty looked through the album several times when I gave it to her and I think she liked all the pictures I chose. I tried to include her kids and all her grandkids in a picture somewhere in the album and I think I did a pretty good job overall. We were having family game day the day I gave it to her and she made sure everyone got to see the album and it made me feel good that she was so proud of it!