One of the Graphic45 collections that Carmen was able to pick up was Steampunk Spells. When she got it I'm not sure either one of us realized it was Halloween which was silliness on both our parts since it did say "Spells". And the crazy part is that neither of us do a lot of Halloween!

Carmen had given me two shadow boxes when I was last in Houston and my daughter had been asking about making something for Halloween so I told her we could do the shadow boxes and while she seemed excited about the whole prospect she didn't show up on the day we were suppose to make them because she had one too many shots the night before. The girl just can't handle her liquor! *okie crack up laughing*. 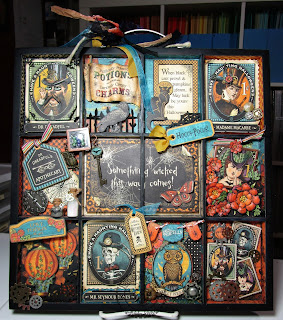 Since I had already planned on making mine I moved ahead without her and started mine. It took me almost a full week to finish the dang thing! I think because of all the fussy cutting and trying to figure out what would work in the little rectangles.

Here is the picture of the whole shadow box and you might need to click on the picture and make it bigger to see it better. 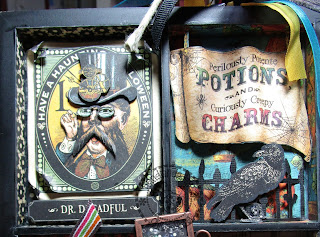 I think you can tell a little better in this picture how much fussy cutting was really involved. I used Glossy Accents on Dr. Dreadful's glasses to make them look like glass. I loved the Potions and Charms image and to get it to fit correctly I had to "wave" it a little. The little fence behind the crow was some border that my friend Amy sent me years ago. 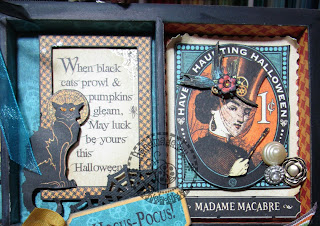 See that tiny little flower on Madam Macabre's hat? Well it's about the size of my pinky nail. I thought I was going to go blind cutting that little thing out! I went through my "antique" button jar for embellishments on the project and added those here and there. The spider web in the cat rectangle was another border that my friend Amy sent me and I have been hanging on to for just the right project...and it only took like 5 years to find the right project! 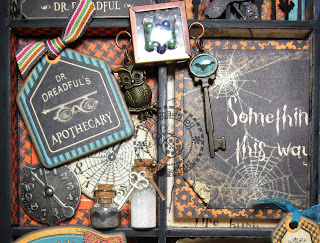 It's hard to see the little beads in the memory frame but I wanted them to resemble something like pills since I couldn't figure out how to add little bone looking embellies in such a small space. The key and owl were some charms I had in stash. I picked up the little bottles the LSS and I added embossing powders in them. 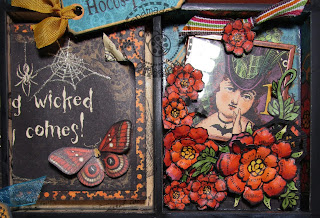 I think a lot of people stopped using Ranger Inkssentials Memory Frames a few years ago since I don't see them around much anymore but I still love using them on projects and that is what image of the lady is in. All the flowers around her were fussy cut and layered. The little butterfly in the square to the left is layered as well. 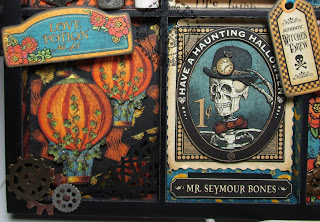 I'm not sure what airballoons have to do with Halloween other than they are orange but I really liked them and wanted to incorporate them into the shadow box and since there is a full sheet of them in the collection I knew they had to match. The clock on the skeleton's hat was cut out again and then pop dotted and Glossy Accents added and all that work was worth the end result. 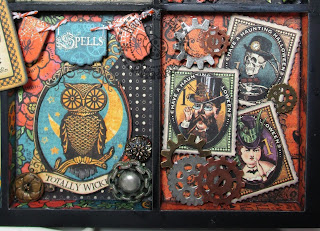 The banner was from a package of banner's that goes with the collection and these worked out great for the space. The metal gears are some embellies I bought off a Facebook group probably last year and I did have Graphic45 paper in mind when I purchased them and they were perfect as embellishment on the shadow box.

I did end up making the shadow box for my daughter as well and I will post it tomorrow. I did try to make it look different but they do look quite a bit a like.
Posted by okieladybug or okie_ladybug