When you are using the same papers and embellishments it is hard to make things look differently but I was able to find a few things to help my daughter's shadow box look different than the one I did for myself. 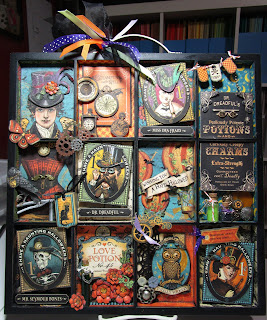 Here is the full view of my daughter's shadowbox and when I finished and sent her the picture she said she loved it! Which she sure dang better as much time and effort as I put in the dang thang! BBWWAAHHHAHHAAA

This was what my daughter said was her favorite part of the shadowbox and I really think I love this lady as well. I used some Perfect Pearls on her feathers. I cut out one of the little flowers and layered it up to add on the hat and it covers a rose that was in that area. I didn't want to cut up a full sheet of paper so I could make the rose dimensional. The crow was on the handlebar and since I couldn't make the bird fit and it looked silly for him to be cut in half I layered him up and then made him go on the edge of the shadow box.

She did actually look a little plain until the gears, moth, cat banner and little gold embellishment at her waist was added. Oh yes and Glossy Accents on her glasses of course!

The clock square was easy enough to do but there is a lot of fussy cutting on those images. As you can see I also used a lot of pop dots in the project.

I think Dr. Dreadful shows up better in this picture than he did in the one I posted yesterday and Carmen said he was her favorite and she thought it was because of his glasses.

This little Miss Ima Fraid is the lady that was in the memory slide on my shadow box but for my daughter's box I decided to layer her up and make her pop. Once again some Perfect Pearls on the feathers add some glitz and I even did her hair with them.

See the little bats in the hot air balloon rectangle? Some of them are printed on the paper and others are fussy cut. Yes I said they were fussy cut and YES I needed my reading glasses and was trying to figure out how to tape a magnifying glass to them so it would be easier to see the little things. The banners were "waved" so they would fit in the rectangle, just like I did a sign on my shadow box.

I loved this image and I knew I had to make a sign out of it somehow but I did have to take up two rectangles to make it work. The little bottles at the bottom have lime green flock and black diamond embossing powder in them to make them potion bottles. I filled in with "charms", okay actually buttons but we will call them charms so they tie in with the sign since it says potions and charms. The little banner is from some cardstock embellies that go with the collection. I used some chain to make the sign look like it was hanging and it would have not been possible without the use of some Sobo glue. I tell ya'll that stuff is like a miracle! 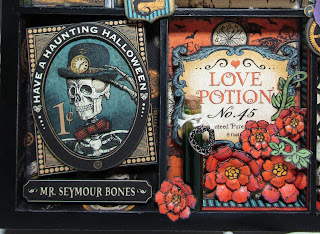 I did the skeleton on this one like I did for mine but I did do a different one with using the "Love Potion" image. My daughter said she loved this rectangle because of the little bottle with the "potion" in it. I just poured a little glimmer mist in the bottle. I added some Sobo glue to the cork and then pushed it in the bottle so I could make sure the cork wouldn't come out and the potion spill out on everything. 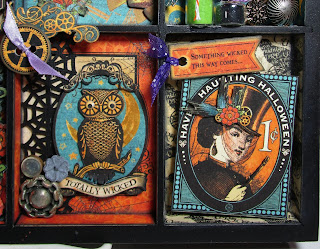 There isn't really much to say about the last two squares since they are like the others but just different images. That and I'm tired of typing now and can't think of anything else to say!