I was sent the Explore Air2 to review and I did a pretty complicated project for my first project with the machine and instead of writing a bunch of stuff and taking a ton of pictures I did a video instead. Actually my friend Carmen suggested a video as it would be easier for people to see the detail. I hate video's because I hate my voice and I am not very good at making the dang things but here it is!! 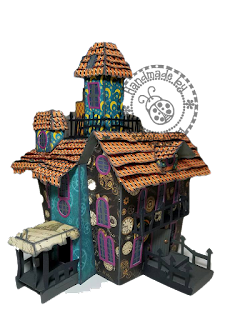 Here is a picture of the house in case you don't want to watch the video. The house is the Haunted Mansion from the Happy Hauntings cartridge and I did have to do some editing *okie thinks saying "some" is the understatement of the year* to the images to get the patterned paper to cut like I wanted so I could apply it to the house it's self.

I am really pleased with how well the Explore Air2 cut all the images and I had some pretty tough ones in there after I got done with my edits of the house. I really liked the ability to speed up the cuts on the regular cardstock. The machine settings won't let you speed up cuts for things that would likely tear up if it did, such as the chipboard setting. One thing I did find annoying was that the Air2 is quite a bit louder than the other Explore machines I reviewed but it is still more quiet than the other Cricuts, Pazzles or the Cameo's I have heard cutting. I think the quietness of the original Explore just has me spoiled 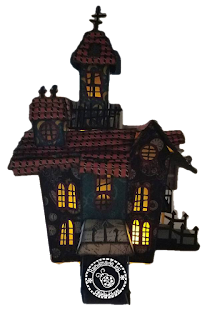 The house is open at the bottom so you can add lighting if you wish. In the video I used battery operated tea lights and they work okay but for maximized lighting I think I would find something with a few more lumens so the windows really light up. 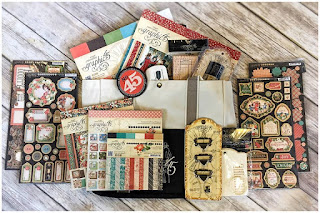 I am super glad I chose this as my first project as Graphic45 was having contests all last week on their Facebook page and my little Haunted Mansion won the really nice prize package in the picture to the left!

This was just a win win situation for me!
Posted by okieladybug or okie_ladybug