Okie's log, stardate 20143.13. Our location is city Orlando *okie cracks up at her impersonation of a Star Trek captain and then realizes it is not quite as funny when no one can hear her*.

My first day in Orlando was quite nice and relaxing. Karen had found out the day before I got there that she was going to have to work Thursday and Friday, but only a half a day on Friday and that would leave me to my own devices. She did offer to let me take her to work and I could use her car to which I replied "if you lived in the back dirt roads of Southern Georgia I would take you up on that but there is no way I am driving in Orlando!". I told her I would be fine while she was at work and would find something to keep myself occupied. 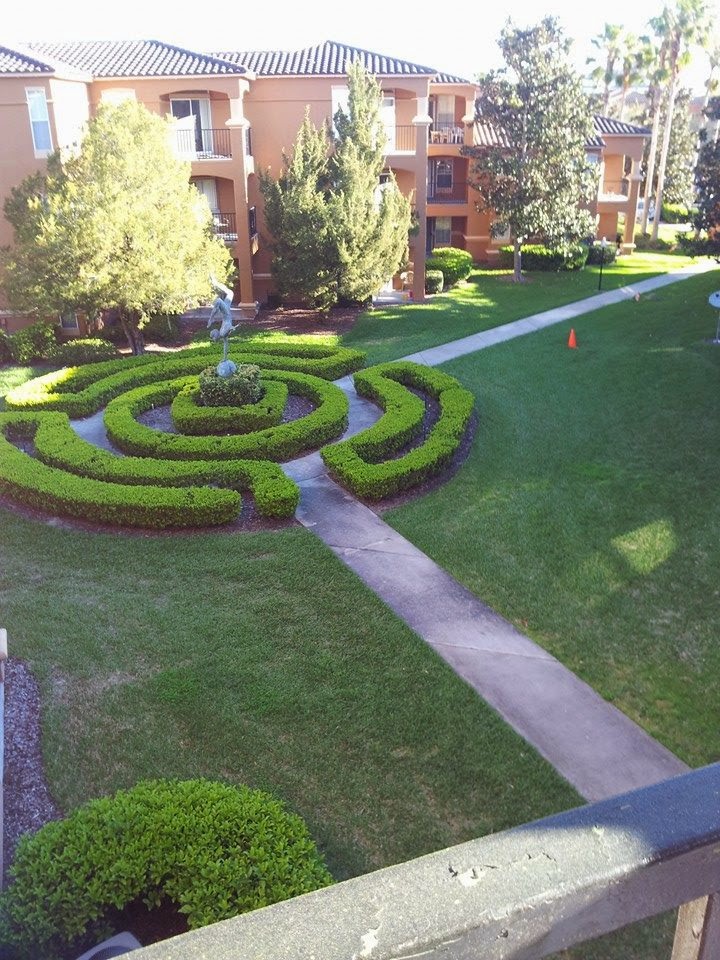 This is the view I had while I had my morning coffee on Thursday and while it was a bit chilly by Orlando standards it was feeling pretty good to me since Mother Nature is being a bit Bi-Polar with our weather in Oklahoma. Heck I was just ready for some regulated temps that stay on a good average for more than 2 days, we had been going from the 70s down to the high in the 30's about every other day when I left Oklahoma.

After getting dressed I wondered what I could do and knew they had to have buses in Orlando, I mean every major city does don't they? I found a website and was posting on Facebook about maybe venturing out and taking a bus somewhere. I quickly got replies of panic from some of my friends who were telling me NO NO NO. My friend Carol was kind enough to say she would come get me and take me where I wanted to go but by that time I had decided to just read my book or venture into Karen's guest room and see what needed to be organized.

I had downloaded 12 Years A Slave and started reading it on my flight to Orlando and I really wanted to finish reading it. I don't read often because when I do I am so engrossed in the story that I don't want to do anything else. I haven't seen the movie yet but I sure want to now, even knowing the book are always better than the movies. I did read a little but thought I could do that at bedtime since I was almost done with the book.

Around noonish or so I walked into look at Karen's guest room where she has her crafty space set up. Now last year I spent quite a bit of time organizing her paper and some other things for her so I knew it wouldn't be a total wreck. As I surveyed the area I knew it was going to take some time for me to decided what was what and where it needed to go. It turned out that "some time" ended up being over 3 hours. I didn't realize it took that long until I started getting a little hungry. Went through her paper again and put her stacks away in her Expedit unit and sorted through some cardstock that had strayed to an Iris paper holder. I reorganized drawers in the plastic bins to where they made sense, adhesives in one drawer, office supplies in a drawer, vinyl in a drawer, etc. My friend Karen has a fetish concerning baggies, she loves the damn things and while her fetish is great when we go on vacation *okie makes a mental note to add a box of baggies to her luggage for her next travel adventure*, I just don't think they are a good method for organizing a lot of things. I gathered all her greeting cards and gift bags and sat in the floor and went about the task of putting them in theme categories. I also matched up all the cards with envelopes so she wouldn't have to search for one that fit when she needed it. When Karen got home I showed her and she was more worried about where her baggie where than how well I did on the organization. I quickly calmed her nerves by showing her I didn't throw away the baggies. She got nervou again when she saw I threw away her ATG gun box and said "HOW AM I GOING TO KNOW HOW TO LOAD THAT DAMN THING? IT TOOK ME HOURS THE LAST TIME". I quickly showed her which draw all her manuals and instructions were in.

We decided to go out for a bit as Karen was wanting a new carryon bag and went to a Tuesday Morning and looked around. Now here is where you might want to sit down...I walked out of there with ABSOLUTELY NOTHING! They did have some papercraft supplies but none that I really needed or wanted. We actually went to another TM later and still once again I bought nothing!

We decided to go eat dinner and settled on Outback Steakhouse...it was H O R R I B L E! Never go to the one in Almonte Springs if you are ever there. After posting on Facebook there were several people who said that was the worst one they had ever been to. Long story short we got one of the meals taken off the ticket.

Back home we watched a little TV and went to bed. Karen still had to work a half a day the next day and I wanted her to be rested for when she got off work. Oh who am I kidding, I knew I would need the rest because Karen about runs me to death when I am in Orlando!
Posted by okieladybug or okie_ladybug