A few months ago I asked my groups if they would like to do some birthday cards. In the past we have done Valentine's, Easter and Christmas cards and I thought it would be nice if they had a few birthday cards on hand to give to others. I am not sure why I asked because I knew the answer would be a unanimous YES! I did agree to let them each make 4 birthday cards. 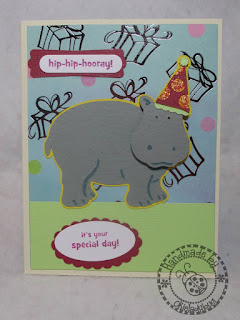 During one session we discussed cooperation and that is when we decided what kind of things they would like on their cards. This first card wasn't really thought up by them but I thought it was one they would like, well actually they did think of a birthday hat!

Since I only have an hour to for group I did assemble the hippo and hat before hand. Since I thought it would be nice to have some Stickles on the hat I figured that was another reason to assemble the image beforehand. We sure wouldn't have enough time to let those dry by the end of group. The group then put all the card mat, image and sentiment pieces together. They alsodid their own stamping.

I did punch the sentiments out so we could get them lined up most of the group members punched their raspberry colored pieces. We used the following Stampin Up punches -
Word Window
Modern Label
Scallop Oval
Large Oval

The file for this card includes the hippo and the birthday hat and it is available in Make the Cut and SVG formats.