12 Card Kits - All Different But All The Same

I posted about never having too many supplies a few weeks ago in my I Am Able To Prove post and about how one of my clients wanted to make a sympathy card instead of a birthday card. I thought I should post a few pictures I got of the cards they made. 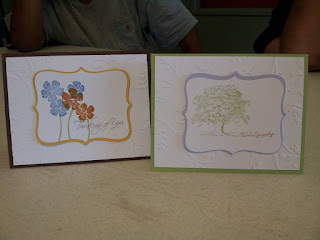 I am always amazed at the compassion my clients at the ICF/MR have for others, especially those who work with them and when someone they know feels pain they are the epitome of sympathetic emotion and compassion. While making the cards they did discuss their feelings about what happened but mostly the discussed how they wished they could help their beloved job coach during her time of grief. 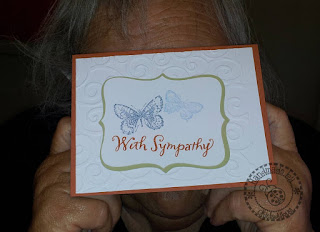 They poured their love in each card they made and carefully chose each stamped image and gave reasons they wanted that particular image. They also were able to choose the sentiments I had printed for the inside of their cards. The lady holding the card she made told me "take my picture with my card" and I explained to her once again why I couldn't take her picture and she said "well here, I cover my face and it is okay". Don't ever let anyone tell ya that my clients don't know their way around confidentiality! I also promised to show her this post on the internet after I got it posted, which I will do in a few days. 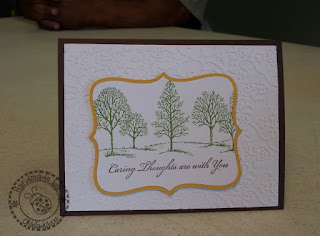 Here is another close up picture, wish I would have gotten pics of all the cards but since they all basically looked the same you can see the basic idea with just a few. I took several Cuttlebug folders and they each used that on the mat of their cards.

Now a little side story about this card making event...
After all the cards were made I went to find the director of the workshop and couldn't find her. I went into the lunchroom to see if the lady that works in there could call and find out where she was as the cards were to go to the grieving mother that night. When I was showing the lunchroom lady the cards a dollar bill fell to the floor. I quickly looked to see whose card it was. The lunchroom lady said "you gotta put that back in there" and I told her "Well I wasn't going to keep the dang thing!" and we both laughed and then we discussed the compassion that was being shown. A few days later the lady whose card held the dollar bill came up to me and said "oh I put a dollar in my card. I wish I would have had a five, but that is all I had at the time". I inquired why she put the dollar in the card and she told me "I know she is going to have to be off work for awhile and she is going to need some money. I just wanted to help as much as I could". Talk about having to choke back tears, which seems to happen to me a lot out at the little place called McCalls Chapel School, I thought I wasn't going to make it down the hall before she saw tears running down my face. I went outside and composed myself and went and reported to the lunchroom lady what my client had said and guess what...she had to choke back a few tears herself!
Posted by okieladybug or okie_ladybug

Email ThisBlogThis!Share to TwitterShare to FacebookShare to Pinterest
Labels: A2 Card, Commentary, Sympathy