In our busy world today we sometimes don't stop long enough to enjoy the simple things in life. Well I can tell ya electricity is one of those simple things! 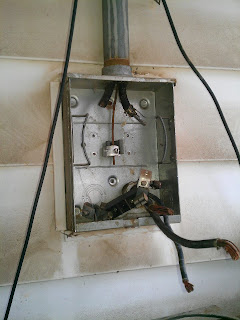 I have been having problems for a few weeks with half the house loosing electricity off and on and an electrician has been here twice before with the same results. Finally he did find the problem and it was a major one. There was a "leg" also referred to as a "phase" out in the lines. The electric company had to come out and disconnect the power and pull the meter. The electrician forgot a few things and had to run to the shop several times and this caused him to lose track of time and thus caused me to be without electricity for the night.

A few weeks ago I had some new neighbors move in and while I don't know them very well I did decide to ask if I could run an extension cord so I could at least plug in the fridge, charge the phones, etc. The woman was very understanding and immediately said she didn't mind at all. I told her I would gladly give her $20 for the electric for the night. She said she didn't want any money and was more than glad to help. I am thinking a box of cards as a thank you is in order for sure!

Since we couldn't cook I took the kids out to dinner and then to Walmart for some batteries for one of the camping lanterns. We also stopped at Goodwill and looked around a bit and then buy Autozone for a headlight lamp for the van. After returning home to a dark house we lit some candles and put the batteries in the lantern. Shiane had her Kindle already charged so she spent time reading a book. Chuck was able to get his homework done and then he and I watched a movie. Most nights all three of us are in separate rooms doing our own things but last night was different since we had to be contained to one area of the house and it was nice spending some time with them. I am thinking it might be a nice thing to have the electric go out a few nights a month.

It's amazing how we take things for granted so much, especially electricity. It reminded me of a simpler time of when I was growing up and we didn't have cable TV, cell phones, laptops or any other electronic devices and the family spent time together eating dinner and watching TV. It definitely made me think "those were the good ol days".

Hopefully the electrician will be here soon and get the problem all resolved and I will be restored to full power. In the meantime I am thankful for having those few hours to spend with the kids just enjoying each other's company.
Posted by okieladybug or okie_ladybug