I showed you guys my test piece and then the first t-shirt I did with the IRON-ON VINYL and I have a couple more projects to show you. 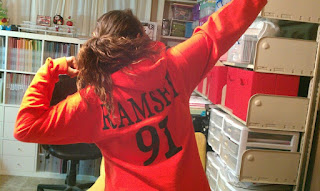 This is my daughter, sorry the picture isn't to great, showing off her hoodie that we personalized with her boyfriends last name and football number. It was quite a feat to accomplish since she couldn't decide on a font for me to use *okie makes a note to tell her daughter...oh only 3 of my Cricut font cartridges work...to avoid this in the future*. Personally I think the letters and numbers are rather large but that is the way she wanted them. But when ya think about it, that is what is nice about being able to do your own, you can make it as large or small as you wish!

The day of the game last week I was working frantically on getting my STADIUM SEAT done, using regular vinyl, when my daughter said she wanted me to do t-shirts for her and her friend Alisha. All I could think about was taking a dang nap! She had been playing with the Gyspy and told me she knew how she wanted them. Since I don't like the Gypsy and it would have taken me forever to recreate the design for using vinyl I was glad I could easily go and recreate it in Design Studio in a matter of a few minutes. 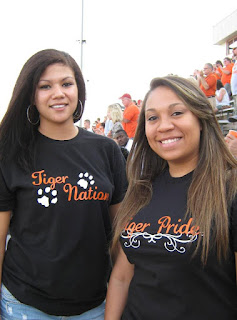 Shiane picked out Quarter Note for the lettering. She used Home Decor for the flourish on her t-shirt and I found some paw prints on Campout for her friend Alisha's t-shirt.

The girls got quite a few compliments on their t-shirts and I even had a few people ask how much I charge. I told them "Oh I only do them for us". Ya'll know good and well I can't create under pressure so for me to try and take on the task of doing t-shirts for money would probably give me ulcers! 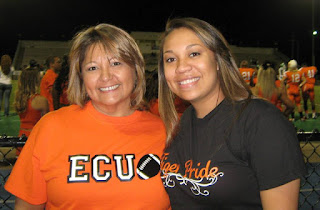 We ran into my oldest Goddaughter at the game and was commenting on our t-shirts and said "ya'll look so cute, I need to take a picture of ya'll" and she did. I am glad she did so I can add this pic to the scrapbook page for this game, but I think it also shows how well the vinyl looks on t-shirts.


I am hoping to get a video tutorial done this weekend. I have at least 5 more t-shirts to do. Chuck's family is coming in for the Homecoming game next week and I am making t-shirts for them. It is the real reason I decided to go ahead and order the iron-on vinyl because t-shirts run anywhere from $20-$30 and I thought this would be cheaper. I was able to pick up t-shirts for $4-$5 and paid less than $50 for 3 rolls of vinyl. So far just the few I have done has paid for the rest of the ones I will do...did that make sense? I hope so.
Posted by okieladybug or okie_ladybug