Have Ya Tried Iron-On Vinyl?

I have been hearing everyone rave about using the iron-on vinyl with the Cricut for quite awhile and while I was wanting to try it I thought it was a bit expensive for me to try and mess up. I searched the internet and asked others about where the best place was to purchase. After researching several places it turns out the best place was the exact place where I get my regular vinyl...SIGN WAREHOUSE!! WHO KNEW? Well okay my friend Lori knew because she suggested I check there.

Chuck, my foster son, who is also once again my daughters boyfriend *okie wonders if she should explain the whole thing but then decides to wait on another post for that long explanation* plays football for the local university and we decided we wanted to make t-shirts to show our support. I ordered vinyl in orange, black and white. Since Chuck's family is coming in from Mississippi for homecoming next month and they asked if we would have some t-shirts made for them so they would be ready when they got here I thought it would be cheaper for us to do them than go to the local t-shirt place. 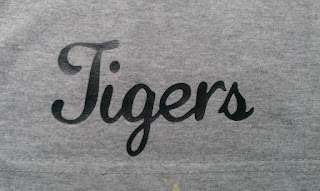 I first did a test run with a small piece before trying something as big as a shirt. Of course I used Design Studio to do this, as I do everything...unless I am forced to use CCR *okie takes a deep soothing breath* but I won't talk about that right now. Anyway, I typed it in backwards s r e g i T and then hit the "flip" button so the letters give me a mirror image. My pressure was set to medium and blade at 2, I did find out that pressure does better at low so it doesn't cut through the already attached transfer film. I did the weeding like you do for regular vinyl and I was ready to iron it on. I just got an old pair of sleep shorts to use since it was just a test. 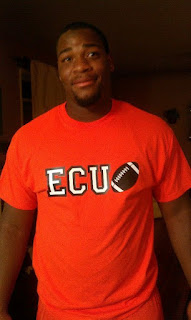 After I did the little word on the shorts I moved on to a t-shirt. I just picked up a  cheap one at the bargain store to work with in case I messed it up. Here you see Chuck modeling the shirt for me, terrible picture of him by the way.

I used Varsity Letter for the ECU and Sports Mania for the football. If you look closely you see the letters didn't quite match up right. Next time I will do the full letter in the black, then do the white with the outline but hide contour on the outer lines. This will put the black in the back and the narrower white on top. The football however did line up perfect. I think if you are layering and have something like Varsity Letters you need to be very careful with not stretching the fabric while ironing the vinyl on.

Chuck's family is coming from Mississippi in two weeks for homecoming and Shiane and I are going to make t-shirts for them. I guess we better get busy on those this week!

If you do check Sign Warehouse for the vinyl you might notice there are some other types than the EnduraTex Iron-On that I ordered and used but I chose this specific one because it can be used easily with a household iron. I am not sure but some of the other vinyls seemed to need very specific tempratures and are probably best used with a heat press.

I will be posting two other t-shirts I made and also a regular vinyl project in the next few days.
Posted by okieladybug or okie_ladybug