Bet when you read the title of today's post you probably thought it was about football didn't ya! Instead it is about my daugther and when her hair grew back in after losing it as a baby. I couldn't believe how it grew just straight up like it did. When she would be outside and the wind would blow it looked like waves of grain swaying around...that ain't no lie!

The layout I used was from the challenge that Anne-Therese of Paper Patch Crafts had posted on her Facebook page last night.  She wanted us to use the layout she got from Pagemaps and then the requirements were to use at least 4 buttons and having sewing, either machine or hand, on the layout. 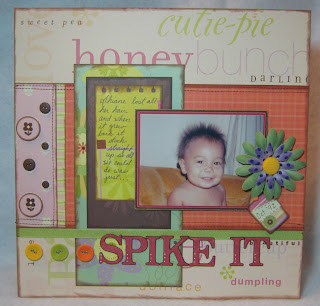 I used Petaloo flowers and layered them then added a button for the center. The button was one from Stampin Up clearance a few months ago and is Summer Sun. The other colors used were Pumpkin Pie and Kiwi Kiss. I have always wanted some of their buttons but you guys know how cheap I am. When I saw some on clearance I jumped on them! I am still too cheap to use them on cards but I don't mind using them on layouts.

The tag with the date was in the K & Co. paper stack, that sure made it easy to add the date! 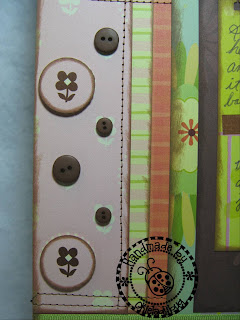 I liked the pink strip and wanted to add some buttons but wasn't sure how since I didn't have miniscule buttons to use as flower centers. What I decided to do was to punch out two of the flowers using a 1" circle punch and pop dot them. I also punched a circle of chipboard to give the circles strength and keep them from losing shape once they are in a book. The inking around the edges made them stand out a lot better.

I added buttons on the center of the white flowers. I know they cover them up but I still like how it turned out. 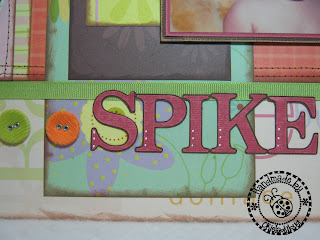 I used Kate's ABC's font for the title of the page. I added a few doodle dots on the lettering to make them stand out a little more than the words printed on the papers. I was going to pop dot the title but I started getting a little lazy and just wanted to finish so I just glued that sucker down instead.