Organizing and re-organizing is something I do often. Sometimes I think I do it more than I craft but then again...NNAAWW, that can't be!! 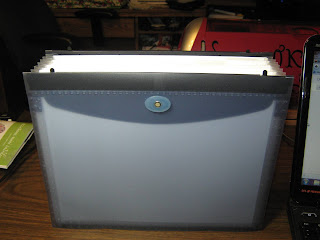 I had to re-organize my cardstock for cards when I got my Stampin Up order because I had ordered some new colors and also ordered some I was close to being out of *okie doesn't think she will ever have enough Chocolate Chip or Old Olive*. I can't remember off hand if I blogged about re-organizing my card cardstock a few weeks ago but I do know I posted about it on Facebook *okie thinks her CRS that her friend Helen, aka DCdoll, diagnosed her with years ago is kicking in again*. Anyway remember the folders that I found during my dumpster diving adventure? Well I used some of those to organize my card cardstock *okie wonders if anyone is wondering why okie keeps saying "card cardstock" and thinks she might need to explain*.

First off let me explain about my "card cardstock", it is cardstock that is 8.5x11 inches. I use it almost exclusively for making cards. Most of what I have is from Stampin Up because I love the quality and thickness. Linda, aka LGuild, and I disagree about it being too thick. I do have to admit that if I made cards for the purposes that Linda does that I would likely agree with her...but then again I might not just so we would have something else to disagree about, we like to do that you might know this by now. 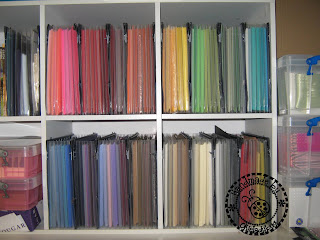 Anyway, I finally got around to re-organizing it a few weeks ago and got it all sorted by color. If you will look to the right of your screen you will see it all nicely stored away *okie listens for the oooo's and aahhh's and beams with pride and has a smile the size of a 10 inch plate on her face* yes I know...I know....IT'S TOTALLY AWESOME!! I love being able to see the colors so I can easily grab the file folder I need to get the color I want. It is so much easier than having it stacked on top of each other. 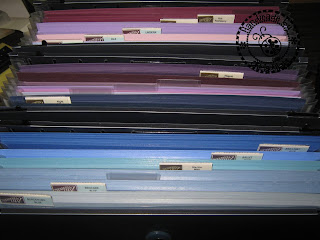 When I got my new cardstock in earlier this week I went about to putting it away and had to move some of the carstock around in the file folders and also added a few so they weren't too crowded. If you will look at the tabs you can see where I cut the label apart and taped it on the tabs so I will know if the cardstock is Stampin Up and also easily identify the color. This will be great for when I get low and need to reorder a color. It really is taking the guessing out of for me.

I am still convinced that my dumpster diving experience of finding these file folders was a once in a life time opportunity and I feel the stars in the cosmo's *okie wonders if she is going over board...shrugs...and decides she isn't going over board* were really watching out for me and wanted me to have my life a little more organized so they made it possible for me to find the fantastic file folders!!
Posted by okieladybug or okie_ladybug