A friend of mine who has a son that plays on the local high school baseball team asked on Facebook if anyone wanted to donate anything for the silent auction they are having. I told her I would make a layout, a double walled tumbler and donate some cards. This is the layout I made for the silent auction. 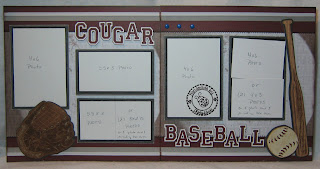 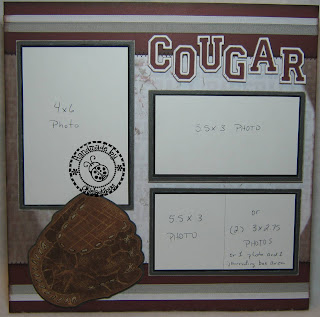 This is a close up of the first page of the layout. I put in white cardstock where the photo's are to go. I thought this would be easier if the person who wins the layout could place the photos, just in case they aren't a scrapbooker. 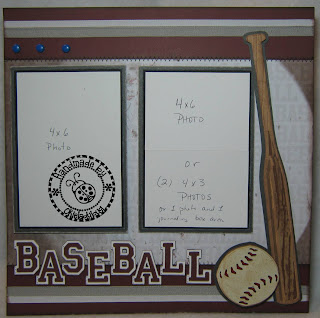 I also used pieces of white cardstock on the second page where photos are to go. I thought I would make the suggestion of using a 4x6 photo or using two smaller photos in the one spot. This way they can use more photos on the layout. 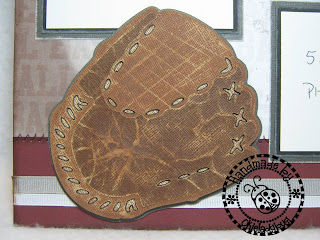 I had posted the layout on Facebook and got a lot of comments about the layout but mostly about the glove. To make the glove I used 3 different colors of Coredinations brown cardstock. I sanded in areas on all of it but on the top layer, which is the darkest brown I wadded up the paper and then sanded the paper to make it look worn. I did a little extra sanding on the palm part of the glove. I then added some Colorbox Chalk Ink to "dirty" it up a bit.  I went around the edges of the "stitching" with a black Stampin Up marker to add a little definition. 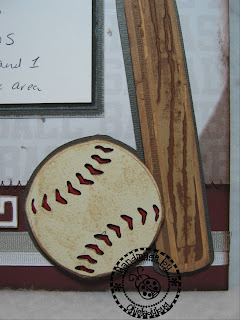 I cut several layers on the baseball and used mounting foam between the layers, it's hard to see in the picture but the ball "pops up" a little more than the other elements. I added a little chalk ink to make the ball look like it's been used. I went around the stitching of the ball with the black marker as well.

On the bat I put all the layers together and then used the Tim Holtz Wood grain embossing folder and then sanded and inked.

I don't know how much the layout might go for but I am curious to see if people will think it is nice enough to bid on!! I will have to update you guys on the final winning bid.