When my daughter was in elementary school getting pictures of her was a rare thing. Not that I didn't take a lot of pictures, I really did, but she would often end up opening the camera on accident and exposing the film. It sure makes me appreciate the digital age we live in today! I was cleaning out my filing cabinet and found some pictures in one of her school folders. I was so excited to see pictures from when she was in first grade that her teacher had taken through out the year and given to me. I just forgot I had them! 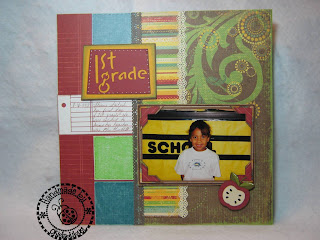 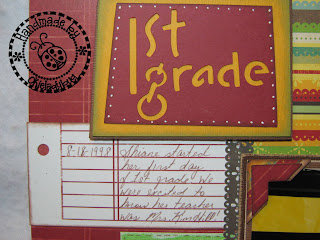 The Creative Imaginations paper had red on one side and white on the other that was patterned like notebook paper. I thought it worked well with the theme and also allowed me to use a piece for the journaling.

The 1st grade cut is from Locker Talk. I think this is a must cart for anyone doing layouts of school age kids. I think it might be retired now, I'm not sure. 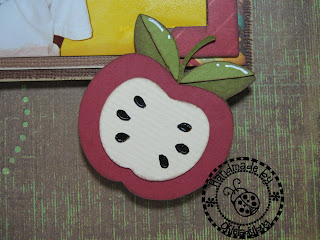 The apple is from the Preserves cartridge. It didn't have a shadow layer so it was difficult for me to use it *okie so loves her shadow layers* but I thought it would work good with the layout. Instead of just leaving the apple seed area green I used the Inkessentials Enamel Accents in black to emphasize the seeds. I think it worked great.

I have a few more pictures that I am looking forward to scrap that I found in the little stack of pictures. Anytime I get upset with my daughter I can always go back and look at layouts of her when she was a child and the anger I am feeling subsides quickly because I remember that precious little girl she was and how I learned that my heart could feel like it was going to burst with love when I would see her and hold her.