When I went to stamp club last week I found this stamp of a vintage Santa Claus and I fell in love with it. I was wanting to use some glossy paper my cousin Lisa sent me and wondered how I could incorporate ProMarkers with the glossy paper and this card was the result.

Letraset now has a blog where you can learn more about their products! If you would like to check them out then hop on over to LETRASET OFFICIAL BLOG. 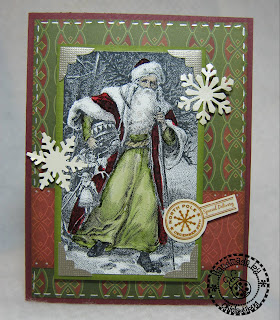 and I didn't look at the maker at the time. I used Memento ink to stamp with and it did well on the glossy. I did have to wait for it to dry a bit longer than I do with the regular cardstock I generally use. I also had to be careful not to let it "slide" when stamping since the glossy paper is a bit slick with the ink. FINE! I will be honest, I did ruin 2 images that way and that is how I know! *okie frowns* Hope you are happy now! *okie crosses arms across chest and gives a long hard huff*

I used two different Martha Stewart snowflake punches to add the snowflakes on the front. The photocorners are an EK Success punch. The sentiment on the front is a clear sticker by Paper Studio. I put it on a piece of Mica cardstock and then cut it out.

I found the inside sentiment on the Hallmark Greetings program that my friend Linda, 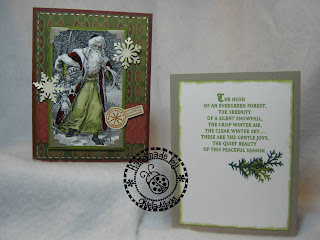 aka LGuild gave me. I wanted something that went well with the stamp and I think the talk about the evergreen trees just made the right touch.

I punched a few branches with the Martha Stewart Branch punch and added them to the inside just for a little nice touch. I would have added berries but I didn't want to go overboard and besides it was getting late as I was finishing up...OKAY OKAY I WAS TOO LAZY! *okie sighs and rolls eyes and hates that her readers make her be so honest about crap*.

The coloring didn't take long at all. I only colored part of the image so it focused 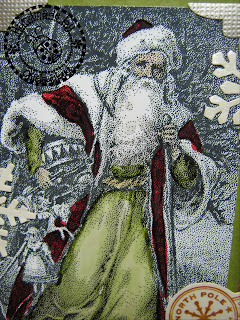 on the Santa Clause. I used Pear Green and Pastel Beige for his gown, dress....uh whatever it is. I first colored with Pastel Beige and then went and blended in with the Pear Green. I first tried with Pear Green and Marsh Green but it was just too dark and bright *okie wonders if that even makes sense* for a vintage image.

For the coat I used Crimson and nothing else. I think the close dots of the stamped image did well enough for shading.

On the fur I used Ice Grey 3 and on the beard there is a touch of Pastel Beige. You might have to click the picture in order to see the coloring in those areas.

I tell ya'll what, I am really enjoying my ProMarkers! I am glad I ordered the extra 24 colors I did and I am thinking after Christmas and the cruise I will be ordering a "few" more markers! I have 64 right now and there are 148. I don't know that I need all 148, but I might!!

LITTLE UPDATE
Carol H evidently knows the stamp if you guys are interested, here is what she had to say...
"I have that stamp!!! It says 2005. Paper Inspirations, paperinspirations.com . It is named Father Christmas. I got it last year and love it. I think I got it at Hobby Lobby."

So if ya like the stamp at least know you know where it can be purchased! Thanks Carol!!
Posted by okieladybug or okie_ladybug