Our little Simon is no longer with us....

Our orange tabby cat, Simon passed on yesterday morning. He was fine on Saturday and then Sunday he was acting very lethargic and had very foul smelling breath. My daughter took him to the vet Monday morning and they found a bone stuck in his mouth. They also found that there was evidently some toxin he got a hold of because his kidneys were not working properly. We went to see him Monday evening and he would not respond to our voices. We left him at the vet for the night hoping he would perk up. Sadly the vet called my daughter yesterday morning to tell us he would not last another hour.

My daughter and I have shed our tears and will likely shed more. But we have some great memories and luckily I have some more pictures of him that I can scrap so he will never be forgotten.

Here are some pictures of dear Simon. 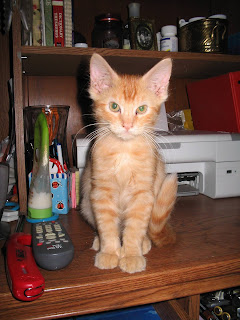 Not long after we got him. When my daughter got her first job she decided that with her paycheck she wanted to go to the shelter and get a kitten. He was super friendly since he was found by the animal warden when he was only a few days old and was use to human contact from the beginning. We didn't realize he had a respiratory infection when we got him but it lead to him being babied for a week or so by us. 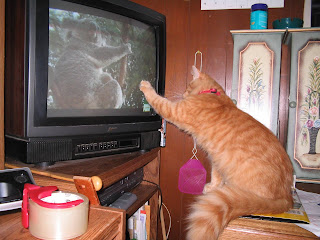 He was so funny watching Animal Planet! He was trying to paw at the Koala bear on the tv here. He always wanted to lay on the keyboard drawer when I was at the computer. And also lay on my scrap table when I was trying to craft. We had a few words about that but he insisted on keeping me company. 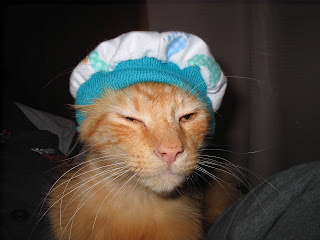 My BFF Karen was making little hats for preemies and we decided to try one on him. He never even pawed trying to get it off. Karen always said she thought Simon acted like a dog and thought Simon probably thought he was a dog. You could call his name and he would come running. He wasn't snobby like most cats, he was always ready for affection, never demanding things were on his terms. 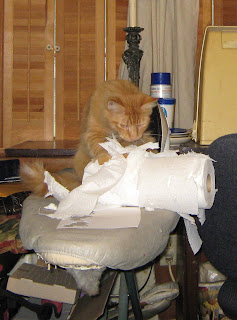 He could be a very ornery boy! I had to make sure paper towels were put where he couldn't get them. I had been moving stuff around trying to get my scraproom re-organized *okie knows she has issues with this and loses valuable crafting time* and had run to Home Depot to get some shelves. When I got home this is what I came in the scraproom to see. Of course I had to grab the camera! 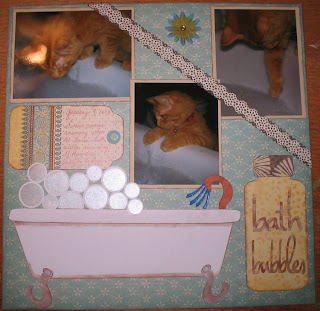 This was the first layout I did of Simon. He loved playing with the bubbles anytime someone took a bubble bath. This was when he was probably about 3 months old or so. But even just last week he came in and played with the bubbles as I was taking a bath.


I am always amazed at the bonds between humans and animals. I know there are so many people in the world that are not animal lovers. THOSE PEOPLE, I feel sorry for.

Simon loved and was loved.
Posted by okieladybug or okie_ladybug