I am sure many of you by now have used the "Elf Yourself" program generated by Officemax. And if you haven't, well you really gotta try it! I first heard of this in 2007 and someone on the Cricut messageboard had done a layout of theirs and I thought it was just too cute not to scraplift! 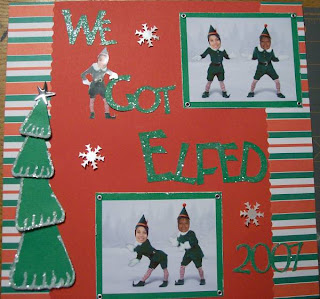 It was quite a trick to capture the shots for the layout and get them to where I could make pictures but after some persistence I was able to do it.

The title is George and the tree is also George. I cut the curved triangles at several different sizes and then stacked them on top of each other. The little snowflakes were a Paper Studio punch.

Oh but look! I layered some printed paper with some plain cardstock! I must have been feeling a little more brave when I did this one.
Posted by okieladybug or okie_ladybug